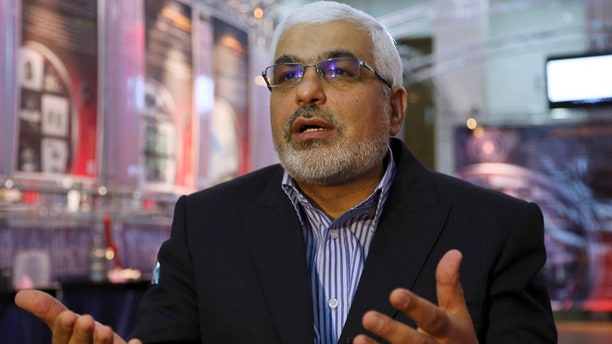 Sept. 1, 2014: Deputy head of the Atomic Energy Organization of Iran Asghar Zarean speaks in an interview with Associated Press as he is seated in a display of various parts and equipment from valves and pumps to electro motors, modems and barometers that they say were exported to the country with alleged purpose of sabotage and spying on Irans nuclear facilities in Tehran, Iran. (AP/Vahid Salemi)

Iran has disrupted plots by foreign spies to recruit its nuclear experts and stopped sabotage attempts through faulty foreign equipment supplied for its facilities, the deputy head of the Islamic Republic's nuclear department told The Associated Press.

The comments by Asghar Zarean, who is in charge of security for Iran's nuclear program, came during a visit by an AP team to Iran's Atomic Energy Organization in Tehran organized by state officials. It also comes as Iran continues negotiations with world powers over its contested nuclear program and after authorities said they shot down a purported Israeli drone near one of its atomic facilities.

"We aim to raise awareness about the enemy, who is more hostile to us every day," Zarean said in an interview Monday, without naming the countries that authorities believe are behind the sabotage and the recruitment effort.

Iran's nuclear program has been the target of sabotage in the past. In 2010, the so-called Stuxnet virus temporarily disrupted operation of thousands of centrifuges, key components in nuclear fuel production, at Iran's Natanz uranium enrichment facility.

Iran says it and other computer virus attacks are part of a concerted effort by Israel, the U.S. and their allies to undermine its nuclear program through covert operations. Israel has never commented on the allegations but is widely believed to have been involved in the Stuxnet attack.

In the interview Monday, Zarean said foreign intelligence agencies targeted the experts when they traveled abroad and that the experts informed their superiors about the contact when they returned home. He did not elaborate on number of the attempts and destinations where the alleged contact occurred.

Experts also demonstrated what they described as a real-time monitoring system that detects malware and cyberattacks on its nuclear program, without elaborating on its abilities. AP journalists weren't allowed to tour a nearby nuclear research reactor that went online with American help in 1967 -- before Iran's 1979 Islamic Revolution strained ties between the two countries.

The U.S. and its allies fears Iran's nuclear program could allow it to build atomic weapons. Iran says its nuclear program is for peaceful purposes, like generating electricity and medical research.

Despite the negotiations, Zarean said its program remains a target for foreign spies, pointing at Iran's powerful Revolutionary Guard shooting down a purported Israeli drone last month near the uranium enrichment facility in Natanz, some 240 kilometers (150 miles) south of the capital, Tehran. Israel has not comment on the drone, which Iranian officials said came from a northern country that once was part of the Soviet Union.

"With the dominance, resistance and vigilance that our defense system has shown, any flying object aiming to approach our nuclear sites will be targeted," Zarean said. "We are not joking with anyone. From now on they will see that (our response) to such jokes will be serious."