Internet service goes out across Syria 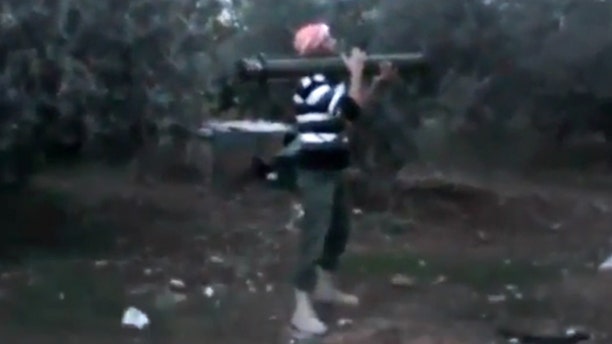 Nov. 27, 2012: In this image taken from video obtained from the Ugarit News, which has been authenticated based on its contents and other AP reporting, a Free Syrian Army fighter fires his weapon toward a military tank, unseen, in Daraa, Syria. (AP/Ugarit News)

Internet service went down Thursday across Syria and international flights were canceled at the Damascus airport when a road near the facility was closed by heavy fighting in the country's civil war.

Activists said President Bashar Assad's regime pulled the plug on the Internet, perhaps in preparation for a major offensive. Cellphone service also went out in Damascus and parts of central Syria, they said. The government blamed rebel fighters for the outages.

With pressure building against the regime on several fronts and government forces on their heels in the battle for the northern commercial hub of Aleppo, rebels have recently begun pushing back into Damascus after largely being driven out of the capital following a July offensive. One Damascus resident reported seeing rebel forces near a suburb of the city previously deemed to be safe from fighting.

The Internet outage, confirmed by two U.S.-based companies that monitor online connectivity, is unprecedented in Syria's 20-month-old uprising against Assad, which activists say has killed more than 40,000 people.

Regime forces suffered a string of tactical defeats in recent weeks, losing air bases and other strategic facilities. The government may be trying to blunt additional rebel offensives by hampering communications.

State Department spokeswoman Victoria Nuland condemned what she called the regime's "assault" on Syrians' ability to communicate with each other and express themselves. She said the move spoke to a desperate attempt by Assad to cling to power.

Separately, state-run TV said the outage was due to a technical failure that affected some provinces, adding that technicians were trying to fix it.

Activists in Syria, reached by satellite telephones unaffected by the outage, confirmed the communications problems.

A young Syrian businessman who lives in an upscale neighborhood of Damascus, which some refer to as part of "the green zone" because it has remained relatively safe, sent a text message to an Associated Press reporter Thursday that said the Internet had been cut in his area and that mobile phone service was cutting out.

He said he was driving Wednesday through the Damascus suburb of Aqraba, near the airport, and saw dozens of rebel fighters for the first time in the area, riding in pickup trucks and motorcycles, and wielding AK-47s.

Their presence so close to the "green zone" may have led to the Internet being cut, said the resident, who spoke on condition of anonymity because he feared government reprisal. He said the military was positioned a few hundred meters away from the rebel fighters and had built large speed bumps to enclose the area.

The opposition said the Internet blackout was an ominous sign that the regime was preparing a major offensive.

"I fear that cutting the Internet may be a prelude to a massacre in Damascus," said Adib Shishakly, a Syrian opposition figure from Cairo, Egypt. "The regime feels it is being choked off by rebels who are closing in on the capital from its suburbs. It's a desperate move, they are trying to sever communications between activists."

Renesys, a U.S.-based network security firm that studies Internet disruption, said in a statement that Syria effectively disappeared from the Internet at 12:26 p.m. local time.

"In the global routing table, all 84 of Syria's IP address blocks have become unreachable, effectively removing the country from the Internet," Renesys said. It added that the main autonomous system responsible for Internet in the country is the Syrian Telecommunications Establishment, and that "all of their customer networks are currently unreachable."

Jim Cowie, the chief technology officer at Renesys, said the abruptness of the outage suggested it wasn't due to a severed cable. Syria has several cables that connect it to the outside world, and all of them would have had to be cut at once for a complete outage. A power outage or an intentional shutdown at central Syrian telecommunications facilities is a more likely cause, he said.

"We saw everything go in three to four minutes, which looks like a light switch," Cowie said.

He said the profile of the outage was similar to what the Egyptian government did in January 2011 during the Arab Spring uprising that toppled longtime leader Hosni Mubarak. Egypt switched off the Internet for five days, halting businesses, banking and -- at the height of the demonstrations -- the ability of protest leaders to organize and communicate with each other.

Bahrain's Sunni rulers also jammed cellphones during the military offensive on the protesters' encampment in the capital of Manama in March 2011. Internet service remained at a crawl when the Bahrain's military stormed the city's Pearl Square -- the headquarters of the revolt -- after weeks of street protests.

Ann Harrison, deputy program director for the Middle East and North Africa at Amnesty International, said in a statement that the group worried the communications were cut in Syria "to shield the truth of what is happening in the country from the outside world."

Thursday's violence appeared to be focused on southern suburbs near the Damascus international airport, forcing the military to shut the road to the facility. The surrounding districts have been strongholds of rebel support since the uprising began.

Austria Press Agency said two Austrian soldiers assigned to the U.N. Disengagement Observer Force in the Golan Heights were wounded after their convoy came under fire en route to the airport. The report, quoting the Defense Ministry spokeswoman, said the two did not appear to be critically hurt.

Rami Abdul-Rahman, head of the Britain-based Syrian Observatory for Human Rights, said the regime has started a major offensive around the airport where rebels have been particularly active in recent weeks.

Abdul-Rahman, who relies on a network of activists in Syria, said large convoys of government reinforcements were seen heading south toward the airport, which is 15 miles southeast of Damascus. The fighting was concentrated in and around the suburbs of Aqraba and Beit Saham, he said.

The Syrian Information Ministry later said the airport road was secure after attacks by "terrorist groups" on motorists, according to state TV. It was not immediately clear whether the road had been reopened.

The fighting prompted both Emirates airline and EgyptAir to cancel flights to Damascus.

Despite months of sporadic fighting and deteriorating security in Damascus, the airport has remained open.

But EgyptAir said in a statement that the airline will halt all flights to Damascus and Aleppo starting Friday, until further notice. EgyptAir head Rushdi Zakaria said the decision was due to deteriorating security conditions in Syria.

Syrian TV also said government forces were chasing "al-Qaida elements" around Damascus, mostly in the eastern suburbs of Douma and the southern suburb of Daraya.

The Observatory said the regime used warplanes to hit districts including Daraya, where fighting has raged for days.

The operation around Damascus comes days after rebels made significant advances in the area. Last week, they captured a major helicopter base just outside the capital.

In the southern city of Daraa, where the uprising began, rebels detonated a car bomb near the house of a senior member of the country's ruling Baath Party, killing him and his three bodyguards, activists said. Rebels frequently target regime figures and military commanders.