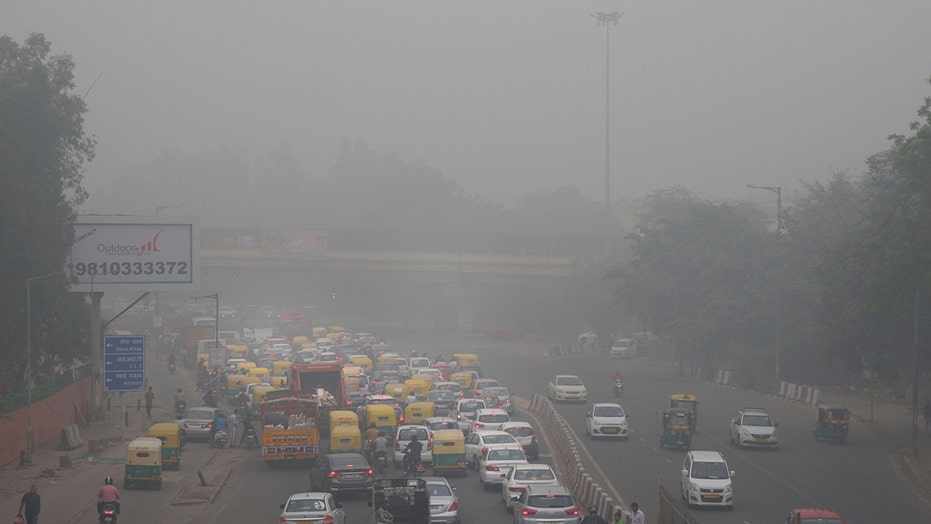 Toxic smog choking India’s capital has shut down schools and prevented planes from landing at an international airport — but doctors say what’s most concerning is how the foul air has sickened many of New Delhi’s citizens.

New Delhi officials declared a health emergency Friday, asking the city’s more than 20 million residents to stay indoors. Schools were closed for five days and authorities handed out millions of free masks to children as the deteriorating air quality reached a three-year high.

"The city is not livable anymore," street vendor Devendra Verma said. "Sometimes I think I should pack my bags and leave Delhi for once and all."

Delhi's skyline is seen enveloped in smog and dust in on Friday. (AP Photo/Manish Swarup)

The air quality index (AQI) for New Delhi reportedly measured over 900 in some areas over the weekend, with Delhi's Chief Minister Arvind Kejriwal saying that the city had been turned into a "gas chamber." An AQI of 0-50 is considered “good,” according to India’s government-run air quality service.

While India’s health minister Harsh Vardhan downplayed the health risks of the filthy air, insisting it was only of concern to those with pre-existing lung conditions, doctors in the capital have said the city is “in the middle of a health emergency.”

"I have patients from all age groups and most of them are nonsmokers who complain of breathlessness, chest congestion, fatigue and weakness," Dr. Salil Sharma, a throat specialist, said of the patients he’s seen recently. "In some cases, I had to put some patients on a ventilator because they couldn't breathe."

Sakshi Chauhan, a 22-year-old recovering from a severe throat infection, said she hasn't left her house for six days because "the moment I step outside, I can't breathe properly."

Air pollution in New Delhi and many of India’s northern states peaks this time of year as farmers in agricultural regions burn crop stubble to clear their fields. Smoke from fireworks set off during Diwali celebrations, the Indian festival of light, also contributes to the bad air and poor visibility.

Authorities in New Delhi are restricting the use of private vehicles on the roads under an "odd-even" scheme based on license plates to control vehicular pollution. (AP Photo/Manish Swarup)

The smog has also reduced visibility so that more than 30 planes were diverted from Delhi airport, the Guardian reported.

Officials instituted an “odd-even” plan limiting cars to only drive on certain days based on the numbers on their license plates in an effort to reduce air pollution. Officials said the scheme would take 1.2 million vehicles off the road every day.

The city is not livable anymore. Sometimes I think I should pack my bags and leave Delhi for once and all.

India has the world’s 10 most polluted cities, according to data the World Health Organization released last year. However, on an average day, New Delhi doesn’t even crack the top 10 Indian cities, ranking 14 on the list behind cities in the states of Haryana and Uttar Pradesh, India Today reported.

The nation’s Supreme Court has sought accountability from state governments over the poor air quality.

"This can't go on," the court said Monday. "People aren't safe even inside their houses and rooms."