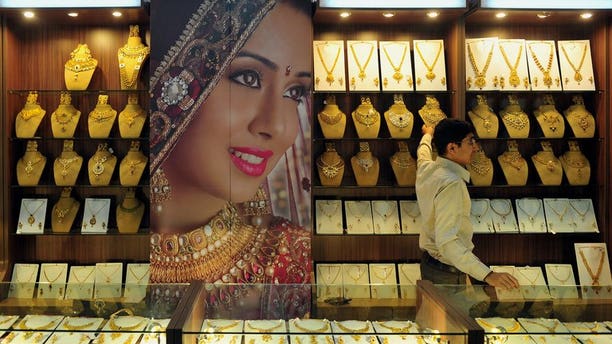 An Indian jewellery store worker pictured in Bangalore on October 14, 2011. India, the world's biggest gold-buying nation, has slapped fresh curbs on imports of the precious metal in a bid to curb a record current account deficit. (AFP/File)

India, the world's biggest gold-buying nation, has slapped fresh curbs on imports of the precious metal in a bid to curb a record current account deficit.

The Reserve Bank of India (RBI) announced late Monday at least one-fifth of every shipment of gold imported must be set aside for jewellery and other sales overseas.

Some 16 percent of India's total merchandise exports are made up of jewellery and gems.

Authorised gold importers such as banks and gold trading agencies must ensure at least 20 percent of every lot of imported gold "is exclusively made available for the purpose of export", the bank said.

Gold and oil imports are the biggest contributors to India's current account deficit, the broadest measure of trade, that hit a record 4.8 percent of gross domestic product in the financial year ending March as imports outpaced exports.

The bank's move comes after India twice hiked the import duty on bullion earlier this year to discourage gold buying.

"India does not produce an ounce of gold. You pay in rupees, but the government has to spend dollars to buy gold," Chidambaram said.

Many Indians -- especially in rural areas where there are few banks -- also buy gold in the form of jewellery, bars and coins as a hedge against inflation which has been stubbornly high.

Ratings agencies have threatened to downgrade India's sovereign investment rating to junk status unless the government improves the nation's finances, including its current account deficit.

The restrictions on gold have led to an upsurge in smuggling with Nepal police on Wednesday seizing 35 kilograms (77 pounds) of the commodity bound for India.