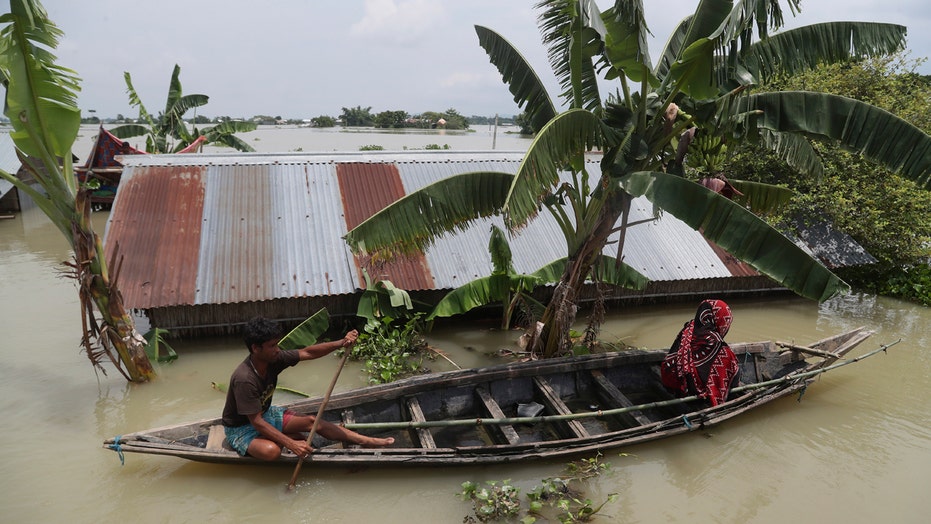 GAUHATI, India – Six more people have died in floods and mudslides in northeastern India's Assam state, officials said Tuesday, taking the death toll to 77 from more than two weeks of heavy rains that caused one of Asia's largest rivers to overflow.

“We have 40 teams of the State Disaster Response Force in the worst-hit areas and the army also is on standby,” Mannivanan said.

The Brahmaputra River, which flows through Tibet, India and Bangladesh, burst its banks in Assam late last month, inundating large swathes of the state and triggering mudslides.

Hundreds of thousands of people have been affected by floodwaters and landslides following incessant rainfall in the region. (AP Photo/Anupam Nath)

In neighboring Bangladesh, over a million people are marooned or have left their homes for higher ground along with their cattle and other belongings.

A family travels in a country boat over floodwaters in Gagolmari village, in Morigaon district of Assam, India, July 14. (AP Photo/Anupam Nath)

“The situation is grim, although the Brahmaputra's waters have receded slightly today with the intensity of rains coming down a bit,” Manninanan said.

LIGHTNING STRIKES IN INDIA KILL 147 OVER 10 DAYS, HUNDREDS HAVE DIED SINCE MAY

Thousands of people were taking shelter Tuesday on a raised river embankment after being displaced from their submerged homes in central Assam’s Morigaon district.

A man rows a boat near his submerged house in Gagolmari village, in Morigaon district of Assam, India, July 14. (AP Photo/Anupam Nath)

“Our villages and all nearby villages have been under chest-deep water for about a week now,” said Nilima Khatun, who was clutching her 2-year-old child. “We are passing days in misery with no relief coming our way from the government.”

In the Pabitora wildlife sanctuary, 21 miles east of the state capital, Gauhati, an entire one-horned rhino population of over a hundred were taking shelter in artificially built highlands.

“The entire park is submerged with the rhinos moving to the highlands for shelter," park ranger Mukul Tamuly said by phone.

Annual monsoon rains hit the region in June-September. The rains are crucial for rain-fed crops planted during the season but often cause extensive damage.