In Israel, bid to outlaw the word Nazi sparks freedom of expression concerns 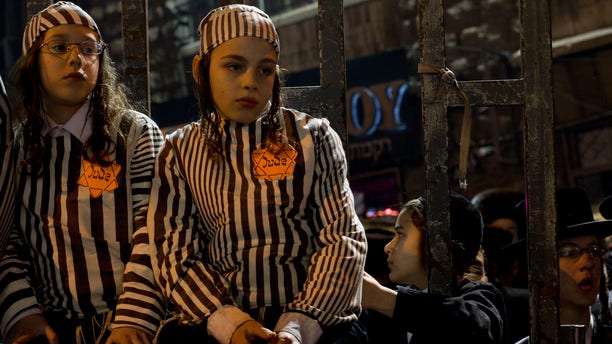 FILE - In this Dec. 31, 2011 file photo, Orthodox Jewish children, wearing a Star of David patch and uniform similar to those the Nazis forced Jews to wear, attend a rally in Jerusalem's Mea Shearim neighborhood. A bill moving through Israel's parliament that seeks to criminalize use of the word Nazi has sparked a debate on freedom of speech in a state that was founded out of the ashes of the Holocaust and where public figures are known to invoke the murder of millions of Jews for political purposes. (AP Photo/Bernat Armangue, File) (The Associated Press)

An Israeli draft law that would criminalize the use of the word Nazi in most cases has sparked a debate on freedom of speech in a state that was founded out of the ashes of the Holocaust.

Seven decades later, memories of the extermination of millions of Jews during World War II permeate virtually every aspect of life in Israel. Public figures and interest groups frequently invoke the World War II genocide to score political points, and the word and Nazi symbols have slipped into Israeli discourse over the years.

The bill would impose a fine of 100,000 shekels (nearly $29,000) and six months in jail for anybody using the word or symbols from Adolf Hitler's Third Reich in a "wrong or inappropriate way." Educational settings or artistic performances would be exempt.

The Knesset gave preliminary approval to the measure on Wednesday, but it still must pass three more readings and committee discussions before becoming law. A similar effort in 2012 fell in committee amid opposition.

Its sponsor, Shimon Ohayon from the hard-line Yisrael Beitenu party, said the law would put Israel on par with other nations "battling anti-Semitism." He acknowledged enforcement would largely rely on violations being reported to police.

"We want to prevent disrespect of the Holocaust," said Ohayon, the bill's sponsor. "We allow too many freedoms which are taking over in a way that is harming us."

Opponents say the measure endangers freedom of speech in a country that takes pride in being a democracy in a volatile region dominated by monarchies and authoritarian leaders.

"Week after week you want to shut mouths and harm freedom of expression," said Zehava Galon, leader of the opposition Meretz party.

Six million Jews were murdered in the systematic Nazi effort to kill all the Jews of Europe. Created in 1948 in the shadow of the war, Israel provided a haven for hundreds of thousands of refugees freshly liberated from Nazi death camps. Today, it is home to about 200,000 aging survivors.

Preserving the memory of the Holocaust has become a central tenet of Israeli identity. Students learn about the event from a young age and thousands of high school pupils make an annual pilgrimage to Auschwitz and other Nazi death camps in Europe to forge a personal link to the murder of millions of Jews.

The country comes to a standstill on Israel's annual Holocaust remembrance day, when Israelis reflect for a moment as a siren sounds nationwide. Visiting foreign leaders are routinely brought to Israel's Holocaust memorial to directly confront the dimensions of the nightmare, and the nation's military leaders hang posters of a famous flyover by the Israeli air force over Auschwitz in 2003.

However, unlike other nations scarred by the Holocaust, such as Germany and France, Israel does not have a law specifically barring the use of Nazi symbols and they have crept into society.

In the most noteworthy example, protesters at a tumultuous Jerusalem demonstration brandished pictures of Israeli Prime Minister Yitzhak Rabin in a Nazi SS uniform in the months before he was killed. Combined with calls for Rabin's death and hard-liners branding him a traitor, critics charged that the climate of incitement emboldened Rabin's assassin to shoot him.

Ultra-Orthodox Jewish demonstrators have donned yellow Nazi-style Star of David patches to protest government policy and shouted "Nazis" at Israeli police who try to break them up. Jewish settlers have worn the patches as Israeli soldiers removed them from settlements to be evacuated. Sports fans have been heard taunting players with the slur "Nazi."

The Holocaust also has routinely been invoked — some say exploited — for political aims. Israeli Prime Minister Benjamin Netanyahu frequently compares Iran's nuclear ambitions to Nazi Germany. Tehran denies it is seeking atomic weapons, as Israel and its allies allege. Some Israeli doves have also compared Israel's occupation of the West Bank and Gaza and its treatment of the Palestinians to Nazi behavior.

Many experts said they don't see a need for such a law in Israel. Israeli historian Tom Segev said Israelis already treat the legacy of the Holocaust with the gravitas it deserves. He also called into question how the law would be enforced and the feasibility of throwing anyone who mentioned the word "Nazi" into jail.

"Through education, through the example of our leaders, cultural and political and others, people would understand that they should not use these symbols when they don't belong," he said.