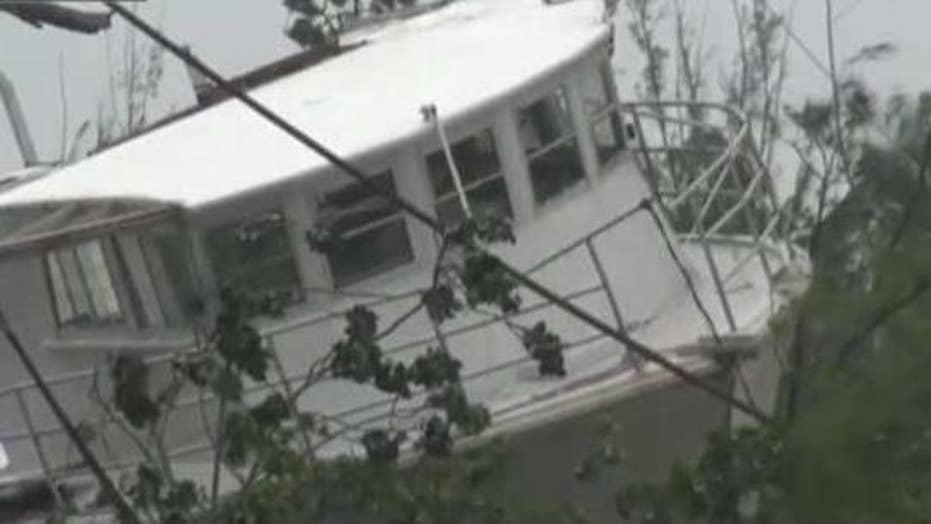 'Total sense of destruction' in the Bahamas after Hurricane Dorian

Steve Harrigan reports from Nassau on the scale of destruction and aid efforts on the northern islands.

As rescue teams fan out in attempts to reach areas of the Bahamas devastated by Hurricane Dorian, dramatic accounts of survival are emerging from the blasted landscape of smashed and flooded homes.

Dorian's punishing winds and torrential rain battered the islands of Abaco and Grand Bahama for more than a day and a half, which have a combined population of about 70,000 and are known for their marinas, golf courses and all-inclusive resorts.

The official death toll stood at seven Wednesday but was certain to rise, after the islands were blasted with winds up to 185 mph and a storm surge that sent waters lapping at the second-story of homes. Dorian is currently lurking off the coast of Florida and will make a "very close brush" with the Carolinas.

"We are in the midst of one of the greatest national crises in our country's history," Prime Minister Hubert Minnis said Tuesday.

Hurricane chaser Josh Morgerman, who says he has chased storms for 28 years, said on Twitter that Dorian was "the most intense cyclone" he witnessed while attempting to ride out the storm in a solid-concrete school in Marsh Harbour.

"Winds pounded the building with the force of a thousand sledgehammers. Crept out during eye to find school mostly destroyed, cars in parking lot thrown around & mutilated," Morgerman wrote, in part.

Accuweather's Jonathan Petramala gives a first-hand account of the damage caused by Dorian.

When Dorian's eye moved over the island, Morgerman said those in the school "frantically piled into few functioning cars" and relocated to a government complex before the storm's back end struck.

"Building filled with terrorized refugees, many who had swam to safety or abandoned collapsed houses," he wrote. "The calm eye saved lives—gave victims [a] chance to relocate."

He also described how horrible the storm's aftermath is.

"Whole neighborhoods were swept by mighty surge higher than anything in memory. Areas above water had catastrophic wind damage. Many deaths reported from drowning, flying debris, & collapsing houses," he wrote on Twitter. "Medical clinic overwhelmed. An absolute catastrophe. SEND HELP TO THE ABACO ISLANDS."

Volunteers walk under the wind and rain from Hurricane Dorian through a flooded road as they work to rescue families near the Causarina bridge in Freeport, Grand Bahama, Bahamas, Tuesday, (AP Photo/Ramon Espinosa)

Tim Aylen, a photojournalist working for the Associated Press, had to wade through chest-high floodwaters after escaping his Freeport home with his 12-year-old daughter Julia Aylen, and his 17-year-old son, Matthew Aylen.

Matthew Aylen wades through waist-deep water as he is rescued from her flooded home during Hurricane Dorian in Freeport, Bahamas, Tuesday, Sept. 3, 2019. (AP Photo/Tim Aylen)

Aylen said in a series of Twitter posts that their home was several miles inland from the north shore of the island and not in an evacuation zone. Aylen said they didn't want to "unnecessarily fill" an already crowded shelter. Dorian's surge, however, would change that.

Julia Aylen wades through waist-deep water carrying her pet dogs as she is rescued from her flooded home during Hurricane Dorian in Freeport, Bahamas, Tuesday, Sept. 3, 2019. (AP Photo/Tim Aylen)

"The water rose within 2 mins in the house and was up to windows. We thought about attic-trap. Roof-no way safe. We found dry land," he said on Twitter, responding to someone who suggested staying put might be safer.

Rescue teams were fanning out across the northern Bahamas as the winds and rain subsided, with more than 600 police officers and marines in Grand Bahama and an additional 100 in Abaco, according to National Security Minister Marvin Dames.

"The devastation is unlike anything that we've ever seen before," he said. "We're beginning to get on the ground, get our people in the right places. We have a lot of work in the days and weeks and months ahead."

Defense Secretary Mark Esper said Wednesday he has given approval for the military to airlift USAID personnel and supplies to the Bahamas, in addition to assessment teams.

“I have approved DoD support to NORTHCOM to airlift USAID personnel and supplies and we also will be sending along with that aircraft a DoD airfield assessment team, an airfield clearing team and an air traffic control team to open the Bahamas up as soon as possible for relief flights, aid flights," Esper told reporters in Germany. "So again that’s all in addition to what we’re prepared to provide for the people of Florida, Georgia, South Carolina, North Carolina, and others."

Rescuers used jet skis, boats and even a bulldozer to reach children and adults trapped by the swirling waters, while the U.S. Coast Guard, Britain's Royal Navy and relief organizations tried to get food and medicine to survivors and take the most desperate people to safety.

A man talks on his mobile phone next to a catamaran that was thrown onshore by the Hurricane Dorian near highway close Freeport, Grand Bahama, Bahamas, Tuesday Sept. 3, 2019. (AP Photo/Ramon Espinosa)

Red Cross spokesman Matthew Cochrane said Tuesday that more than 13,000 houses, or about 45 percent of the homes on Grand Bahama and Abaco, were believed to be severely damaged or destroyed.

"It's total devastation. It's decimated. Apocalyptic," said Lia Head-Rigby, who helps run a hurricane relief group and flew over Abaco. "It's not rebuilding something that was there; we have to start again."