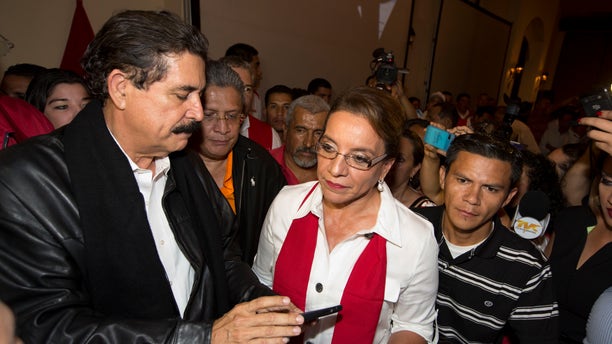 Free Party presidential candidate Xiomara Castro, center, and her husband, ousted President Manuel Zelaya, left, check information on his cell phone before the announcement of official election results in Tegucigalpa, Honduras, Sunday, Nov. 24, 2013. Hondurans cast ballots for a new president Sunday in a country reeling from violence, poverty and the legacy of a 2009 coup that ousted Zelaya. (AP Photo/Moises Castillo) (The Associated Press)

The electoral court says Hernandez got 35 percent of the votes to 29 percent for his closest challenger in an eight-candidate field, Xiomara Castro. The body already had said Monday that Hernandez held an irreversible lead in the count.

Castro reacted to Wednesday's declaration by saying that there was fraud in the election and that she will present the evidence Friday.

Her husband, former President Manuel Zelaya, was ousted in a 2009 coup, and her campaign was considered his attempt at a political comeback. Castro declared herself the winner Sunday. The two have said they don't accept the official results.