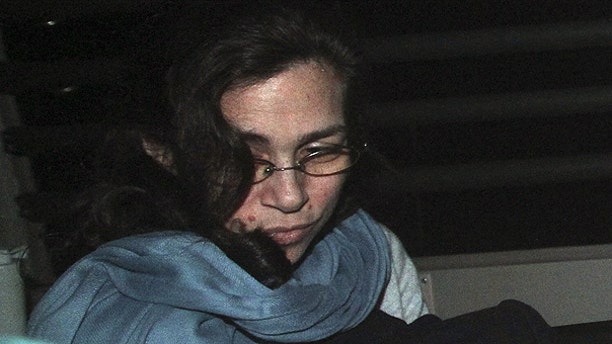 March 24: Nancy Kissel, an American woman accused of killing her husband, leaves the High Court by a prison van in Hong Kong. (AP)

A Hong Kong jury convicted an American of murder at her second trial Friday for drugging her wealthy husband with a sedative-laced milkshake and bludgeoning him with a metal ornament more than seven years ago.

The unanimous verdict and automatic life sentence match the original outcome of the 2005 case against Nancy Kissel, who testified her husband, Robert, physically and sexually abused her as their marriage deteriorated.

She had denied murder but admitted to the lesser charge of manslaughter for his death in November 2003. Prosecutors argued Robert Kissel's death was a carefully planned murder that Nancy Kissel tried to conceal.

Kissel, a native of Adrian, Michigan, did not appear to react as the verdict was announced in court. Her defense did not immediately say whether it will appeal.

Her first trial grabbed worldwide attention as it detailed the breakdown of a wealthy expatriate marriage in this southern Chinese financial hub. The case spawned two books and a TV special.

Kissel's lawyer, Edward Fitzgerald, asked the judge to recommend compassion for Kissel when a review board evaluates her sentence. He cited Kissel's good character and the context of the crime, which the defense alleges came from an abusive relationship.

In opening statements in January, prosecutor David Perry revisited the gruesome details of Robert Kissel's death. Kissel struck at least five blows to her husband's head while he was lying face down in the bedroom, subdued by a mix of six drugs, Perry said. She then covered the body with a plastic bag and towels and wrapped it in a carpet, then had it moved to storage, he said.

"The more involved he got with the investment banking, the more forceful he was with me sexually," a frail and tearful Kissel testified.

The 2005 conviction and sentence were overturned last year because prosecutors improperly cross-examined Kissel and the original judge allowed hearsay evidence.