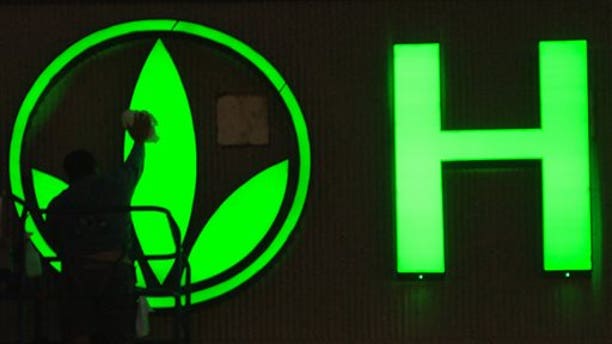 FILE - In this Friday, Sept. 8, 2006, file photo, provided by Herbalife, a worker cleans the logo on the Herbalife sign as finishing touches are put on the company's new building in Torrance, Calif. Herbalife Ltd. says that it is facing an inquiry from the Federal Trade Commission. Herbalife said that it received the civil investigative demand from the FTC on Wednesday, March 12, 2014. The FTC's website says that these are used to investigate possible "unfair or deceptive acts or practices." A representative from the FTC was not immediately available to elaborate. (AP Photo/Herbalife, Susan Goldman, File) (AP)

Hedge fund manager Bill Ackman has won a round in his 15-month fight against supplements and weight-loss products maker Herbalife. The direct seller's shares tumbled Wednesday after Herbalife revealed that it is being investigated by the Federal Trade Commission for possible "deceptive practices."

Since December 2012 Ackman has spent millions waging a public campaign against Herbalife and building up an army of lobbyists, community organizers and members of Congress to push regulators to investigate what he calls a "pyramid scheme," that makes most of its money by recruiting new salespeople rather than on the products they sell. It is a charge that Herbalife has repeatedly denied.

Ackman, the head of Pershing Square Capital Management, holds a whopping $1 billion "short" position in Herbalife, meaning he's bet that the company's stock will drop and profits when it does. While short sellers are sometimes demonized for profiting at another's financial pain, they can play an important role in discovering problems with companies. Hedge fund manager David Einhorn of Greenlight Capital took out a massive bet against Lehman Brothers in 2007, accusing the investment bank of not disclosing all of its potential losses from the housing market downturn. That bet turned out to be right. Lehman filed for bankruptcy in September 2008, sparking the financial crisis.

So far Ackman's campaign has had mixed success. The SEC began conducting its own investigation into Herbalife shortly after Ackman's initial accusations, but so far it hasn't led to any enforcement action. He sparred publicly with Carl Icahn, who owns 17 percent of Herbalife through his firm Icahn Associates, with Icahn calling Ackman a "crybaby" on television. Icahn has defended Herbalife and increased his stake in the company in recent months to back up his comments. The stock, which was hit hard at the outset of Ackman's crusade, more than recovered, doubling to an all-time high of $83.51 at the beginning of this year.

Herbalife, which is incorporated in the Cayman Islands and based in Los Angeles, uses a network of distributors to sell its nutritional supplements and weight-loss products. Other companies, such as Amway, cosmetics companies Avon and Mary Kay and kitchen products maker Tupperware, use a similar network of independent contractors who market merchandise through demonstrations and other personal contacts.

Many people looking for extra income are attracted to becoming direct sellers because there are no large upfront fees. Startup kits range from a few dollars to several hundred dollars, according to the website of the Direct Selling Association, a national trade group based in Washington. There were nearly 15.9 million people involved in direct selling in 2012, and their sales rose nearly 6 percent to $31.6 billion that year, the most recent data available from the trade group.

Individual sellers earn money based on how much they sell, and often, the sales of others. But the direct selling industry has been increasingly under a microscope amid charges of deceptive practices by sales reps who have lost money. The Direct Selling Association says it requires its members to adhere to a code of conduct that includes doing business with "transparency" and "consumer protection at the core." The National Consumers League and the Direct Selling Education Foundation distribute a brochure with information on how consumers can protect themselves against pyramid schemes.

Herbalife said Wednesday that it believes it complies with all laws and regulations and plans to cooperate fully with the FTC. It said it welcomes the inquiry given the "tremendous amount of misinformation in the marketplace" about its business.

The FTC's investigation into Herbalife comes less than two months after Sen. Edward Markey (D-Mass.,) called on regulators to investigate its business practices, after Markey said he heard complaints from former Herbalife sales representatives about improper pressure and financial hardship stemming from their work with the company. It comes a day after Ackman held a public presentation to detail claims of Herbalife violating laws in China and vowed to pursue his campaign against Herbalife "to the end of the earth." Pershing declined to comment Wednesday on the investigation.

FTC spokesman Peter Kaplan on Wednesday confirmed the existence of the probe but declined to comment further. In a letter this week, SEC Chairwoman Mary Jo White said her agency could not confirm or deny if the SEC was still investigating the company.