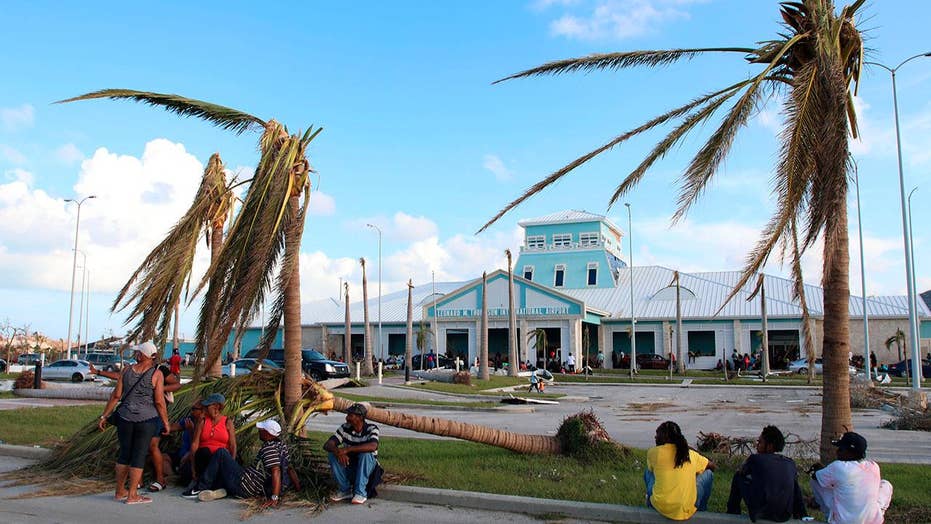 When we arrived at Freeport, Grand Bahama Island's largest city and major port, the first thing we noticed was the debris. One plane at Grand Bahama International Airport sat on the side of the airport access road with its front ripped off. It appeared to have been thrown across four lanes of traffic.

Most homes in Freeport are standing and many buildings appear intact, but severely water-damaged. People were hanging clothes across fences and in trees in an effort to dry them out. Other items damaged beyond use -- including couches, sheets, books and food -- were piled up by the road.

Within seconds of turning down a residential road in the first neighborhood we came to, a woman yelled at us to ask if we had any water. We threw her the only bottle of Powerade we had in the back of our truck.

A few houses down, another man cleaning debris out of his house threw his hands up, yelling, "Help us! Please!"

Dorian tore huge gaps in the roads here. First responders say that is the key obstacle to getting aid to people. On our road, someone carved out a path to get around the gaps. We followed that path along with other locals who had stopped, not knowing how to get through.

In a village about 25 minutes from Freeport, maybe two houses were livable. Neighbors were taking each other in and helping to clear out homes.

'THERE IS NOTHING LEFT': FOX NEWS' STEVE HARRIGAN DESCRIBES DEATH, DEVASTATION IN BAHAMAS

The first woman we spoke to said the hurricane sounded like a freight train when it came through. She and her family stayed up all night and huddled in small sections of the living room for safety. As we talked, the woman's 7-year-old grandniece, Amelia, picked through toys piled in the front yard. She selected a doll and a small dollhouse to take with her to the neighbor's house where they'll stay, at least for now.

Two houses down, we met Renea Cooper, who is staying with four other families at a neighbor's house. She said she, her husband and sister were in their home when Dorian came. When the house flooded, Renea climbed to the roof and sat there for eight hours.

Finally, as the storm was letting up, Renea heard someone yelling, "Hey! Are you in there?" It was her cousin, and his voice to Renea was "the sweetest sound I ever heard."

Because the home was still flooded, Renea, her cousin and others in the neighborhood formed a human chain through the water and made it to the one house that was still intact. That's where they are now.

Renea told us she wasn't sure what do to next. She hasn't had contact with anyone in days because there is no cell service. I ask if she wants to use our satellite phone. She used it to call her sister in Atlanta.

"Hi, Judy. Yes, it's Renea." I could hear her sister gasp excitedly on the other end of the line.

East of Freeport, in Bevans Town, one home was completely gone, the toilet and bathroom tiles all that remained. Another house had been ripped open and was filled with debris. Books were still on the bookshelf. Family photos and wedding photos stood in frames on another shelf where the wall had been ripped away. What should have been an enclosed room was open to the world. You could reach in and grab a book, if so inclined. The roof was also gone.

I asked a local if anyone had heard where the families who lived here went. He wasn't sure but said people who lived in the area were not told to evacuate. He also wasn't sure if they would have left.

Further east, in High Rock, we were met by a man named Cecil, the local pastor, who told us that 17 people had died there. He knew all their names. Some were in their teens, one was a child. One man lost his entire family. Most of the victims died when the house they were in collapsed.

Cecil said he heard yelling the night Dorian hit but initially did not go outside because the wind was too strong. When he finally did get outside, he saw a neighbor clinging to a tree. Cecil got close to the man, Richard, and told him to jump. They missed each other, but Cecil was just able to grab the neighbor and told him not to let go. Cecil said he's an experienced diver, but it took all of his experience to fight being swept away by the wind and water.

I asked Cecil and his daughter if they wanted to use our satellite phone. His daughter wanted to call her daughter, who lives in Florida.

"Josie! It's mama!" she said. "We lost everything, but we are alive. Tell the family."