The two Hawaiian women whose tale of survival in the Pacific Ocean is being picked apart by Coast Guard officials and researchers now claim crew members of the Taiwanese ship that towed them to a U.S. Navy vessel were actually trying to kill them.

Jennifer Appel told NBC News on Wednesday the vessel was purposely ramming them, although she did not explain why.

"The Taiwanese fishing vessel was not planning to rescue us," she said. "They tried to kill us during the night." 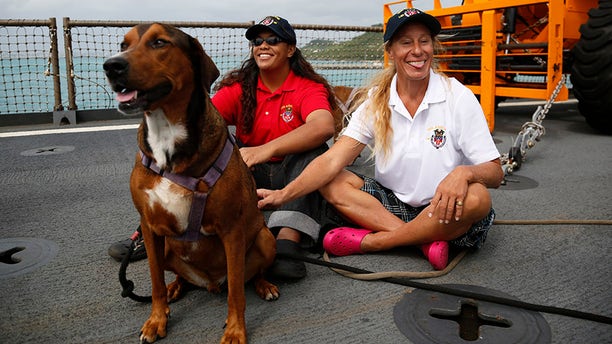 Tasha Fuiava, left, and Jennifer Appel were rescued by the Coast Guard. (AP)

The ship discovered the two women and their dogs on Oct. 24, around 900 miles southeast of Japan, before they were towed to the USS Ashland, the Navy said.

"We were never 'lost at sea.' We knew where we were the entire time," Appel told NBC News. "While the media portrayed a rescue with the Taiwanese fishing vessel, they were actually the reason why we called for help."

"They tried to kill us during the night."

Appel claims instead of using an emergency beacon (EPIRB) she had on board her ship to call for help, she decided to get on a surfboard and climb onto the deck of the Taiwanese vessel. She then reportedly called the Coast Guard for help using a satellite phone on board the other ship.

“I was able to get on a surfboard and get on their boat, make an actual phone call,” she told NBC News. “Because no one spoke English, it was easier and safer for me to relay the information to the U.S. Coast Guard-Guam sector that we were in danger without them realizing what we were saying. If I had thrown the EPIRB at that point, he [the captain] would have known.”

In an interview with Matt Lauer, Appel and Tasha Fuiava also defended other sensational claims from their story, including a supposed mass attack by 30-foot tiger sharks that experts immediately questioned.