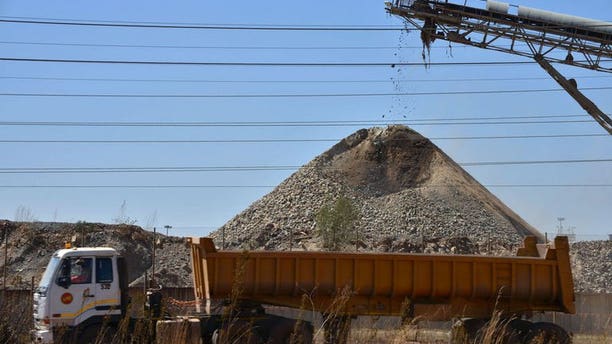 Work continues at a mine in Carltonville, South Africa as efforts continue to end a strike by miners on September 5, 2013. The world's fifth-largest gold producer Harmony Gold said it was holding talks to try to end a crippling miners' strike, after rival firms reached deals with their workers. (AFP)

The world's fifth-largest gold producer Harmony Gold said it was holding talks on Saturday to try to end a crippling miners' strike, after rival firms reached deals with their workers.

The National Union of Mineworkers (NUM) said all its members except those employed by Harmony Gold had gone back to work after accepting wage increases of between 7.5 percent and 8.0 percent.

A spokeswoman for Harmony Gold, which is South Africa's second-largest gold producer, said miners at most of its operations remained on strike, and it was meeting unions for talks.

"We're having meetings with the union during the course of the day. Hopefully we'll come to a solution over the weekend," Marian van der Walt told AFP.

Tens of thousands of gold miners had on Tuesday night refused to go underground, demanding higher wages in the latest in a string of strikes to hit South Africa.

Miners at most operations accepted the new deal on Friday despite having demanded 60-percent hikes, but those at Harmony were holding out for more, said NUM spokesman Lesiba Seshoka.

"They have not returned to work because they are not happy with the offer."

At the strike's peak, the seven firms represented by the Chamber of Mines said 16 out of 23 mines were severely affected.

The wind down of gold shutdowns eases some labour tensions in the strike-prone country, although stoppages continue in the construction and automobile sectors.

This year, strikes have been relatively calm in contrast to those of 2012, when a police crackdown at Lonmin's Marikana platinum mine left 34 dead.