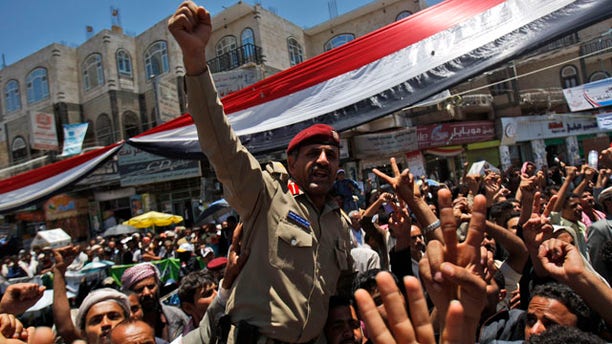 Gunmen on motorcycles sped by and opened fire on hundreds of demonstrators camped out in the early hours of the morning Wednesday in a Yemeni port city, killing at least three and wounding several protesters, according to Reuters.

Opposition activist Radwan al-Obisi said the protesters in the Red Sea port city of Hodeida were demanding the ouster of longtime President Ali Abdullah Saleh when they were attacked by thugs hired by the ruling party.

The two months of anti-government turmoil in this impoverished nation is threatening to spiral out of control as nearly daily protests across the country are being violently suppressed by security forces.

More than 120 people have been killed since demonstrations, inspired by uprisings elsewhere in the Arab world, erupted in Yemen calling for the end of Saleh's more than three decades in power.

Like much of the of the country Tuesday, Hodeida saw thousands march through the streets, tearing down posters of Saleh, before they were dispersed by police. A number of cities also now feature protesters camping out in main squares, imitating the iconic sit-in at Egypt's Tahrir Square.

The violence has been especially acute in the southern port city of Aden, once the capital of an independent south Yemen and a hotbed of separatist sentiment.

A policeman was killed and four others wounded after clashes with gunmen believed to be associated with the southern dissidents, said witnesses, as hundreds of protesters blocked main roads with rocks and burning tires.

Yemen is plagued by dwindling water and oil resources and a basic inability to feed its population, as well as a tribal rebellion in the north. A local affiliate of al-Qaida has taken advantage of the chaos to set up shop in the country's inaccessible hinterlands and plot attacks on the government and the U.S.

International concern of the situation is on the rise and on Tuesday, the United Nations Security Council met to discuss Yemen, though it failed to agree on a joint Lebanese-German statement calling on parties to "exercise restrain and to enter into a comprehensive dialogue to realize the legitimate aspirations of the Yemeni people."

The Gulf Cooperation Council, consisting of the six other oil-rich nations occupying the Arabian Peninsula with Yemen, has attempted to mediate between the Yemeni government and opposition, but its efforts have so far shown little success.

The GCC's proposal calls for Saleh to step down, but does not present a timetable and offers him immunity from prosecution, something rejected by the opposition.