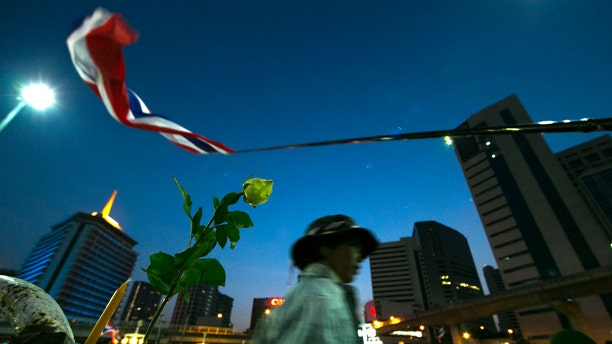 An anti-government protester walks past a flower during a condolence ceremony for the slain protester Prakong Chujan who died in Friday's grenade attack at Lumpini rally site in Bangkok, Thailand Saturday, Jan. 18, 2014. A grenade thrown into a crowd of marching anti-government demonstrators in Thailand's capital killed one man and wounded dozens of people, an ominous development that raises tensions in the country's political crisis and the specter of more bloodshed to come. (AP Photo/Wason Wanichakorn) (The Associated Press)

A gunman opened fire on anti-government protesters in Thailand's capital, severely wounding one man in the latest violence to hit Bangkok as the country's political standoff drags on, officials said Sunday.

The protesters, who control several small patches of the city, are vying to overthrow Prime Minister Yingluck Shinawatra's government.

The man was shot in the back before midnight Saturday in Bangkok's Lad Prao district, where protesters have taken over a key intersection. He underwent surgery at a hospital and was in an intensive care unit on Sunday, according to Bangkok's emergency medical center. Thai media identified him as a 54-year-old from southern Thailand who was helping guard protesters.

The protests, which are also aimed at derailing Feb. 2 elections that Yingluck called in a bid to quell the crisis, have been peaceful and Bangkok — a city of 12 million people — is calm. But assaults have been reported nightly, including shooting attacks at protest venues and small explosives hurled at the homes of top protest supporters.

On Friday, an explosive device hurled at a crowd of marching demonstrators in another part of Bangkok killed one man and wounded dozens of people. Police said the blast was caused by a fragmentation grenade.

It is unclear who is behind the unrest. But prolonged violence, even on a small scale, increases the chance that the military would stage a coup. Such a scenario would benefit protesters, who have called on the army to take sides and do not have the numbers to bring down the government on their own.

Thailand's army has staged about a dozen successful coups since the end of absolute monarchy in 1932.

The Southeast Asian nation has been wracked by repeated bouts of unrest since the military ousted Yingluck's brother, former Prime Minister Thaksin Shinawatra, in 2006 amid charges of corruption and alleged disrespect for the monarchy, which he denies.

The coup touched off a societal schism that in broad terms pits the majority rural poor who back the Shinawatras against an urban-based elite establishment supported by the army and staunch royalists who see Yingluck's family as a corrupt threat to the traditional structures of power. Yingluck's opponents — a minority that can no longer win at the polls — argue the Shinawatras are using their electoral majority to impose their will and subvert democracy.

The crisis boiled over again late last year after the ruling party attempted to push through an amnesty bill that would have allowed Thaksin to return from self-imposed exile.