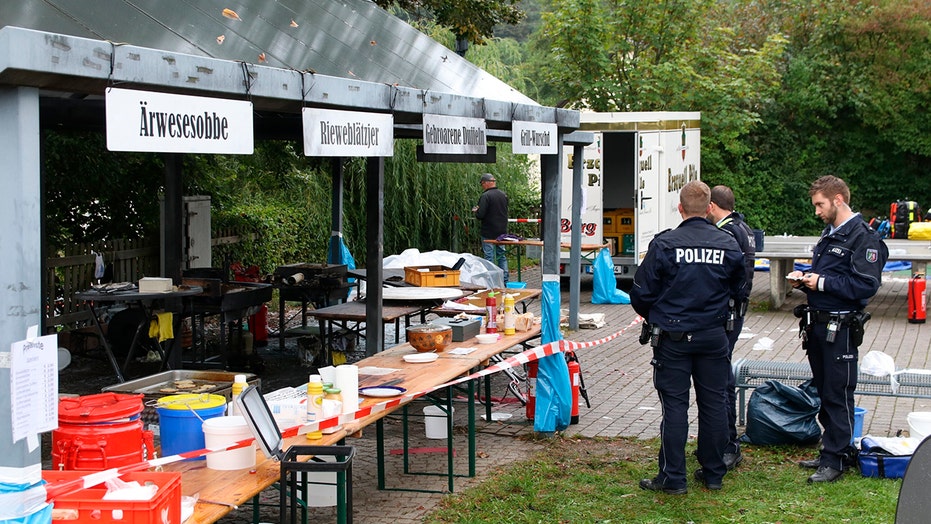 A giant frying pan filled with dumplings exploded at a food festival in western Germany, killing one person and injuring 14 others.

The injured included five--four burn victims and one heart attack victim--who were fighting for their life, German news media reported. The victim who died was severely burned and succumbed to her injuries Monday.

Witnesses said the victims were running around “like torches” at the Backesfest festival in the village of Freudenberg, the Independent reported.

In this Sunday, Sept. 8, 2019 photo police officers investigate a booth after an explosion at a village festival in Freudenberg, Germany.  (DPA via AP)

MARYLAND GAS EXPLOSION RIPS THROUGH BUILDING, FELT OVER A MILE AWAY, RESIDENTS SAY

Freudenberg’s mayor Nicole Reschke told the Bild newspaper that it was an accident, the paper reported.

“This is a terrible misfortune for our little place,” she said.

The explosion may have been triggered by raindrops falling into the hot oil, but investigators said it would still take them several days to fully understand what happened.

The Backesfest celebrates the annual start of operations of a traditional old bakery in the village.