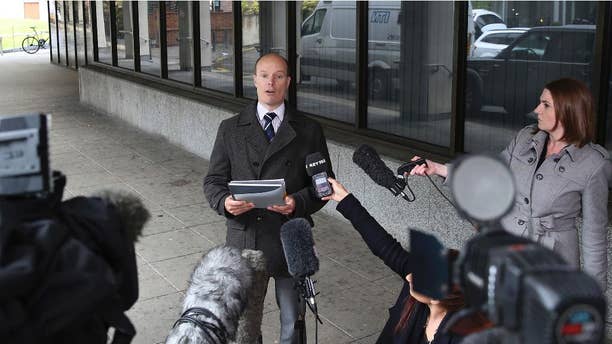 Ben Southam, Senior Crown Prosecutor from the CPS North West Complex Casework Unit, talks to the media outside Manchester Crown Court, Manchester England, Monday, May 18, 2015, after nurse Victorino Chua was found guilty by a jury of murdering and poisoning hospital patients at Stepping Hill Hospital. A medical mystery that began four years ago with unexplained deaths in a British hospital ended Monday when a “frustrated” nurse was convicted of using insulin to murder two patients. The 49-year-old nurse, a father of two daughters, was also convicted of trying to poison 20 other patients during what police called a reign of terror at Stepping Hill Hospital in Stockport, 200 miles (320 kilometers) northwest of London. (Peter Byrne/PA via AP) UNITED KINGDOM OUT (The Associated Press)

A nurse has been convicted of using insulin to murder two patients at a British hospital in 2011.

Victorino Chua was convicted Monday by a Manchester Crown Court jury that had been deliberating for 11 days.

He was cleared of a third murder.

The nurse was found to have injected insulin into saline bags and ampules while working at the Stepping Hill Hospital in Stockport, 200 miles northwest of London.

Other nurses who were not aware of the tampering then used the bags and ampules, leading to insulin overdoses.

In a letter entered as evidence, the 49-year-old nurse said, "There's a devil in me." He wrote that he was "an angel turned into an evil person."