French prime minister: Euro 2016 to go ahead with fan zones 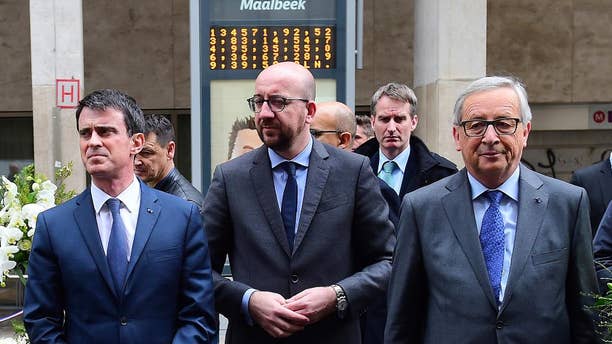 From left, French Prime Minister Manuel Valls, Belgian Prime Minister Charles Michel and European Commission President Jean-Claude Juncker prepare to lay flowers at the Maelbeek metro station in Brussels on Wednesday, March 23, 2016. Belgian authorities were searching Wednesday for a top suspect in the country's deadliest attacks in decades, as the European Union's capital awoke under guard and with limited public transport after scores were killed and injured in bombings on the Brussels airport and a subway station. (Emmanuel Dunand, Pool Photo via AP) (The Associated Press)

Speaking on French state television, Valls said the "strongest answer to terrorists, in addition to the deployment of all intelligence and security measures, is life. The terrorists wanted to suppress life (...). The Euro should be held, and will be held."

With Europe on high alert following the attacks, there are concerns that Euro 2016 in France from June 10-July 10 could be targeted, and especially the fan zones where spectators gather to watch games on large screens.

Valls said seven to eight million fans are expected to visit the open-air areas and that authorities will ensure their safety with strengthened security measures.