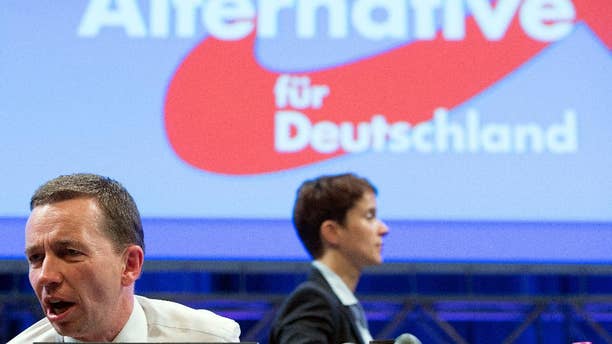 In this July 4, 2015 picture Alternative fuer Deutschland party co-chairs Bernd Lucke , left, and Frauke Petry attend the party conference in Essen, Germany. The upstart Alternative for Germany party has replaced its euroskeptic leader with a conservative from the east who wants to place greater emphasis on immigration. A majority of AfD members backed Frauke Petry in the leadership vote Saturday against Bernd Lucke, who led the party during its successful bids in the past two years to enter the European Parliament and five German state assemblies.(Frederico Gambarini/dpa via AP)) (The Associated Press)

A founder of Germany's upstart Alternative for Germany says he is leaving the party after losing the leadership to a bitter rival who places greater emphasis on an anti-immigration stance than on opposition to the euro currency.

Under economics professor Bernd Lucke, the party narrowly missed the 5 percent threshold needed to enter the national Parliament in 2013. It has since entered the European Parliament and won seats in regional legislatures, but became increasingly mired in infighting.

Lucke, who lost the leadership to rival Frauke Petry last weekend, said in a statement Wednesday that "the party has fallen irretrievably into the wrong hands." He said he hasn't yet decided whether to found a new party, news agency dpa reported.

He complained of ever-stronger anti-Islamic and anti-foreigner views in the party.