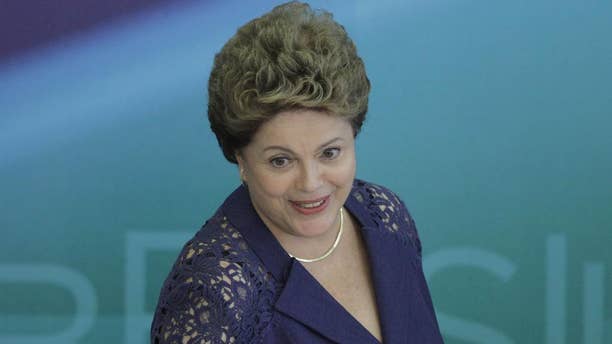 Brazil's President Dilma Rousseff arrives to attend a press conference at the Planalto Presidential Palace, in Brasilia, Brazil, Monday, Dec. 22, 2014. President Rousseff gave one of her last press conferences before the Christmas holiday and talked about various topics, including the recent Petrobras scandal. (AP Photo/Eraldo Peres) (The Associated Press)

President Dilma Rousseff on Monday sharply defended the chief executive officer of the Brazil's state-run oil company despite allegations she was told years ago about some of the irregularities that are ballooning into the nation's biggest corruption scheme yet.

Rousseff said that Maria das Gracas Foster, the first female head of a major global oil firm, had offered to resign in recent weeks. But the president refused to let her go, saying she the allegations against her are unproven.

"I know Gracas. I've always known her to be a serious person, to be an ethical person. She's the one who opened all the (internal Petrobras) investigations now happening," Rousseff said during a breakfast with reporters in Brasilia.

Rousseff added she would only take action if Brazil's federal prosecutors handed her proof of wrongdoing by Foster as they probe allegations of kickbacks, inflated contracts and bribery that totaled around $4 billion.

Petrobras' former manager of downstream operations, Venina Velosa da Fonseca, said during a Sunday night interview aired on Globo TV that she met with Foster in 2008 and told her about inflated contracts and payments for services that were not carried out. Foster led the energy and gas division at that time before becoming CEO in 2012.

"I met with the CEO personally when she was director of the gas and energy unit. At that time, we discussed the matter. I handed over to her the documents about the complaints," she said during the interview on Globo TV. "Afterward, she had access to these anomalies at the management meetings."

Petrobras denied earlier allegations that Fonseca had sent Foster emails that explicitly mentioned the irregularities. It said the CEO was not told specifically about those practices until last month — after Fonseca herself was fired, allegedly because an internal Petrobras investigation found that she was implicated in inflated costs on contracts.

Foster said last week that Fonseca's accusations could be in retaliation for that dismissal.

Fonseca is cooperating with federal investigators and has given her computer to prosecutors probing the corruption allegations.

The investigation of the bribery scheme has resulted in the arrest of more than 30 executives, including several from Brazil's top construction and engineering firms and three former directors from Petrobras.

The construction firms are accused of paying bribes of up to 3 percent of a project's total worth, some of which was then allegedly funneled back to the campaign coffers of several political parties, including Rousseff's Workers' Party.