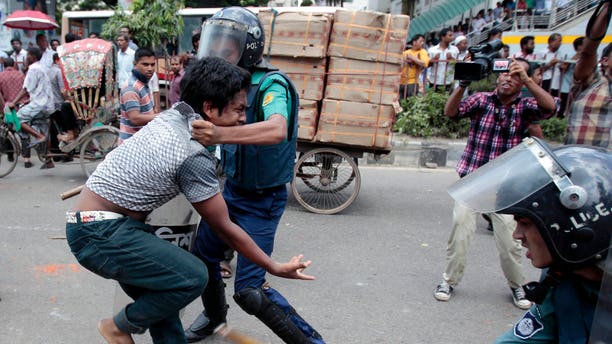 Bangladeshi policemen detain an activist of an Islamic group during a protest in Dhaka, Bangladesh, Saturday, Sept. 22, 2012. Officials and witnesses said scores of people were injured in a clash in Bangladesh's capital between police and hundreds of Muslims who were protesting a film produced in the United States that denigrates the Prophet Muhammad. (AP Photo/A.M. Ahad)

Scores of people were injured Saturday in clashes in Bangladesh's capital between police and hundreds of Muslims who were protesting a film produced in the United States that denigrates Islam's Prophet Muhammad, officials and witnesses said.

Witnesses said the protesters threw stones and burned several vehicles, including a police van, during the melee.

Police fired tear gas and used batons to disperse the protesters, who were from about a dozen Islamic groups, a Dhaka Metropolitan Police official said on condition of anonymity in line with policy.

He said the clash erupted when police attempted to stop the demonstration. Authorities banned all protests near the city's main Baitul Mokarram mosque starting late Friday to avoid unrest.

The official said dozens of protesters were arrested at the demonstration and inside the nearby National Press Club, where participants took refuge.

The protesters announced a nationwide general strike on Sunday to protest the police action.

On Friday, more than 2,000 people marched in Dhaka and burned a makeshift coffin draped with an American flag with an effigy of President Barack Obama.