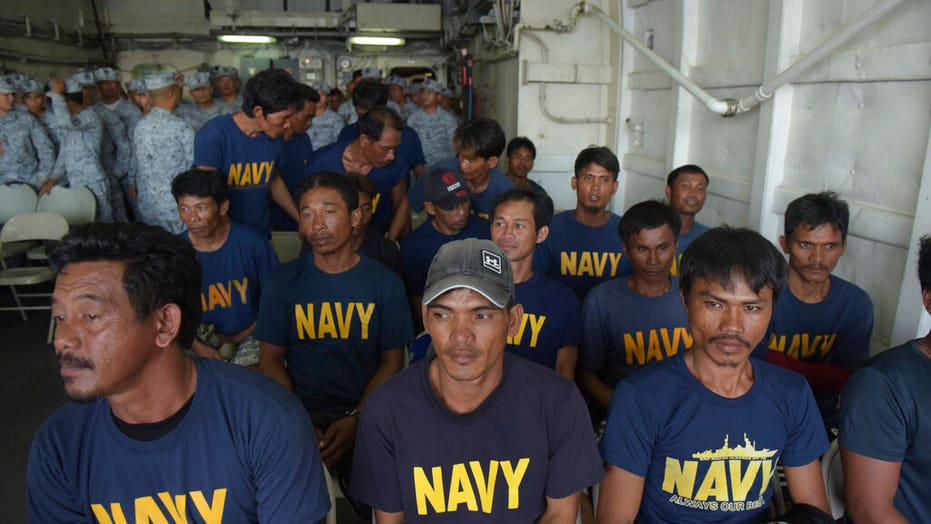 A Filipino fishing boat carrying 22 fishermen sank after being hit by a suspected Chinese vessel in the South China Sea, ratcheting up tensions in the disputed area.

Teodoro Locsin Jr., the Philippines' foreign secretary, revealed Thursday he had filed a diplomatic protest the previous day. In wake of the attack, there were calls from some politicians for President Rodrigo Duterte to recall the Philippine ambassador and consuls in China.

The boat, identified as F/B Gimver 1, sank Sunday night after being hit at Reed Bank off the western Philippine province of Palawan. Vietnamese fishermen subsequently rescued the crew. The boat had been anchored when it was hit, according to reports.

Salvador Panelo, a spokesman for Duterte, said the abandonment of the fishermen by the suspected Chinese vessel was as "uncivilized as it is outrageous."

"We will not allow ourselves to be assaulted, to be bullied, to be the subject of such barbaric, uncivilized and outrageous actions," Panelo said.

Rescued Filipino fishermen sit inside Philippine Navy ship BRP Ramon Alcuaz as they head back to shore at Occidental Mindoro province, Philippines on Friday June 14, 2019. The Philippines' top diplomat said he has filed a diplomatic protest after an anchored fishing boat was hit by a suspected Chinese vessel which then abandoned the 22 Filipino fishermen as the boat sank in the disputed South China Sea.  (AP)

TANKER CREW WERE DETAINED BY IRAN AFTER FIRST BEING RESCUED BY ANOTHER VESSEL: US OFFICIALS

Geng Shuang, China's foreign ministry spokesman, said the incident "should be condemned," but did not confirm or deny if a Chinese ship was involved.

Citing information provided by the Philippines, Geng described the sinking as "an ordinary maritime traffic accident".

"It is irresponsible to resort to the media to hype and politicize the incident without verification," he said, adding a Chinese investigation was underway in coordination with Philippine authorities.

The long-contested South China Sea is a potential flashpoint in Asia with six countries claiming overlapping parts of the water. Tensions escalated after China converted seven disputed reefs into islands that can serve as military bases and intimidate rival claimant states in the strategic waterway, where U.S. forces undertake "freedom of navigation" patrols.

Rescued Filipino fishermen transfer to another ship as they head back to shore in Occidental Mindoro province, Philippines on Friday June 14, 2019.  (AP)

Chinese ships have previously blocked or intimidated Philippine military and civilian vessels at Reed Bank and Second Thomas Shoal, where Philippine marines keep watch onboard a long-marooned Philippine navy ship while being constantly monitored by Chinese coast guard ships in a years-long standoff.

The developments in the South China Sea also come after two tankers were attacked in the Gulf of Oman with suspected mines.

President Trump has accused Iran of being behind that attack after the U.S. Navy released video purportedly showing an Iranian vessel removing an unexploded mine that had been attached to one of the tankers, the Japanese-owned Kokuka Courageous.