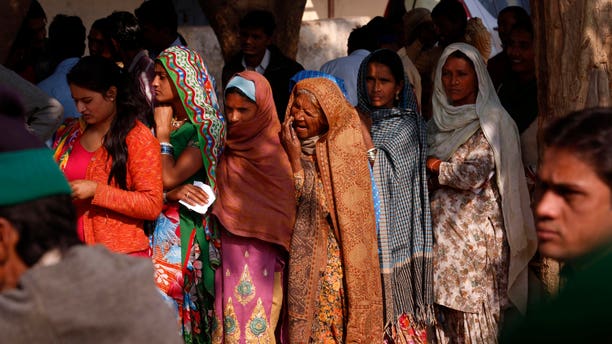 People wait in queues to cast their votes in New Delhi, India, Wednesday, Dec. 4, 2013. Nearly 12 million residents were expected to vote to select the assembly, in a poll that analysts say is expected to show a trend for the three parties heading into next year's national elections in the world's biggest democracy. (AP Photo/Saurabh Das) (The Associated Press)

The elections, held over the past month in Delhi, Madhya Pradesh, Rajasthan and Chhattisgarh, are seen as a test before next year's national elections.

The Hindu nationalist Bharatiya Janata Party, or BJP, has been waging a fierce campaign fronted by its prime ministerial candidate, Narendra Modi, in which he lambasted Congress over corruption scandals and soaring living costs.

Congress faces a likely upset when the results are announced later Sunday in the Indian capital, where a third upstart party campaigning against corruption pulled votes away from three-time Chief Minister Sheila Dikshit.