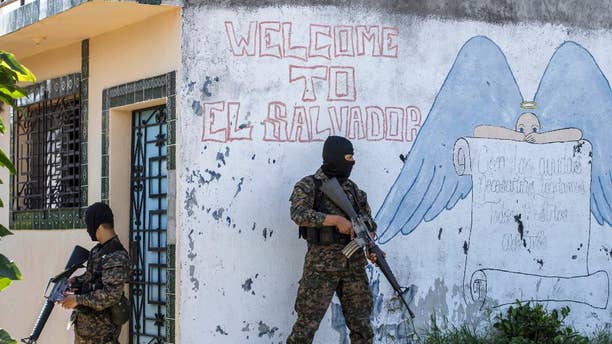 FILE - In this Aug. 31, 2015 file photo, soldiers guard a corner in a gang-controlled neighborhood in Ilopango, El Salvador. A video broadcast by local media on Saturday, March 26, 2016, purportedly made by the country’s main street gangs, is offering an end to killings, and asks the government not to continue an anti-gang offensive. Officials said they would not negotiate with the gangs. (AP Photo/Salvador Melendez, File) (The Associated Press)

Authorities declared a state of emergency Tuesday at seven prisons and transferred 299 high-ranking gang members at the start of "extraordinary measures" that El Salvador's government has promised to take against gangs.

A package of additional measures was to be presented to the legislature Wednesday.

Mauricio Ramirez Landaverde, the minister of justice and public security, said at a news conference that the targeted gang leaders were transferred to a prison 25 kilometers (about 15 miles) west of the capital.

The emergency declaration puts inmates on lockdown and suspends family visits for 15 days.

"They are going to be subjected to a higher security regimen, with greater control to make sure communication from inside the prison system is stopped," Ramirez said. "They have been identified as those most involved in communicating with the outside, in directing and coordinating illegal activities of the criminal groups."

He said mixed units of police and soldiers will handle security inside and outside El Salvador's prisons.

President Salvador Sanchez Ceren said earlier this month that he was considering steps to combat gang violence. His administration has roundly rejected an apparent weekend offer by the gangs for negotiations.

A video message from masked men claiming to represent the country's three most powerful street gangs said they had told their members to stop killing. In exchange, they demanded that the government not proceed with the measures to combat the gangs.

On Tuesday, presidential spokesman Eugenio Chicas said the administration would present an initial package of "extraordinary measures" to the legislature Wednesday. They could include deploying more soldiers in a security role, declaring states of emergency in conflict zones and imposing stiff fines on phone companies that Chicas said have refused to lower cellphone signal strength around prisons.

He said the measures would "guarantee the population's security and be a hard hit against criminality."

Chicas acknowledged that homicides had dropped significantly since the release of the gang video. However, he said it was just a way for the gangs to put a gun to the populace's head, threatening to resume killings if the government doesn't negotiate.

From March 1 to March 28, there were 572 slayings in El Salvador, a country of about 6.1 million people, according to government statistics.