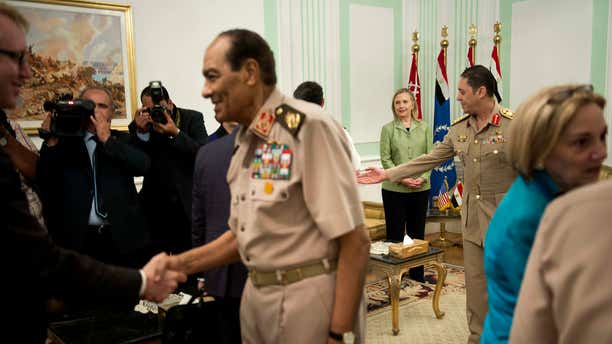 July 15, 2012: US Secretary of State Hillary Rodham Clinton, back center, watches as Field Marshal Hussein Tantawi, second left, greets members of the American delegation before a meeting at the Ministry of Defense in Cairo, Egypt. (AP)

Egypt's top general on Sunday raised the stakes in the military's political standoff with the Muslim Brotherhood, saying the armed forces will not allow a "certain group" to dominate the country.

Field Marshal Hussein Tantawi's tough comments came only hours after he met with U.S. Secretary of State Hillary Rodham Clinton, who urged him to work with President Mohammed Morsi, of the Brotherhood, on a full transition to civilian rule.

The military, which ruled after the fall last year of Hosni Mubarak, and the Brotherhood, the country's strongest political force, are in a competition over power that has intensified with Morsi's winning of the presidency last month. Days before Morsi was sworn in on June 30, the Brotherhood-led parliament was dissolved and the generals gave themselves legislative and budgetary authority and control over the process of drafting a new constitution, put severe limits on the president's authority.

In his comments Sunday, Tantawi did not specify the Brotherhood, but his reference that the military would not allow the group to hold sway was clear.

"Egypt will never fall. It belongs to all Egyptians and not to a certain group — the armed forces will not allow it," Tantawi told reporters after a handover ceremony for the transfer of command of the armed forces' 2nd Army in the Suez Canal city of Ismailia.

"The armed forces will not allow anyone, especially those pushed from outside, to distract it from its role as the protector of Egypt," he said. "The army will never commit treason and will continue to perform its duties until Egypt reaches the shores of safety."

Tantawi has made similar comments at least once in the past, but it was the first time he made the statement since Morsi's inauguration. It was an authoritative signal that the military has no intention of giving the Brotherhood a free rein.

Tantawi, Mubarak's defense minister for 20 years, is the most senior of the generals who took power after Mubarak's ouster 17 months ago.

The military and the Brotherhood have bad blood since the 1950s, when then-president Gamal Abdel-Nasser jailed the group's leaders and hundreds if its members. He ordered another crackdown in the early 1960s, jailing some again and executing a few. Mubarak spent most of his 29 years in office chasing after the Brotherhood, jailing thousands.

In meetings Saturday with Morsi and on Sunday with Tantawi, Clinton said the U.S. wanted the two sides to work together to bring a full civilian democratic rule.

Without taking a position in disputes over parliament or how to draft a new constitution, Clinton urged the military chief to return the armed forces to a "purely national security role," as she termed it Saturday.

On Sunday, Clinton said that resolving the impasse "requires dialogue and compromise, real politics." The United States, she added, is doing all it can to "support the democratically elected government and to help make it a success in delivering results for the people of Egypt."

Morsi's efforts to recall Egypt's Islamist-led parliament — which was dissolved by the military last month — suffered a setback Saturday, when an appeals court said it stood by another court's ruling that the chamber was invalid because a third of its members were illegally elected. Acting on the Supreme Constitutional Court's June 14 verdict, the then-ruling military disbanded the 508-seat chamber.

Morsi defied that ruling and ordered the legislature to reconvene last week. During a brief session of parliament on Tuesday, speaker Saad el-Katatni referred the constitutional court's ruling to the country's highest appeals court for a legal opinion.

After a lengthy discussion on Saturday, the appeals court refused to take up the case, saying it had no jurisdiction over the implementation of the constitutional court's ruling.