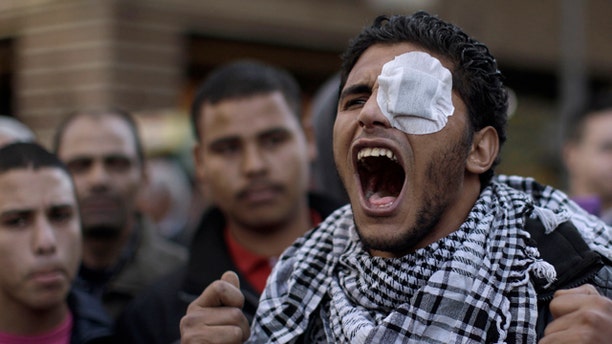 Jan. 31: An Egyptian protestor shouts slogans during a rally outside the Parliament in Cairo. (AP)

Egypt's powerful Muslim Brotherhood on Wednesday issued a harsh denunciation of liberal and secular activists, echoing charges by the military rulers that they receive foreign funds to create chaos in Egypt.

The statement came a day after Brotherhood members clashed with protesters outside the parliament building in Cairo. The protesters were demanding an end to military rule.

The Brotherhood statement backed the military's investigation of pro-democracy and human rights groups. Last month Egyptian security agents raided offices of 10 groups, several of them U.S.-based, setting off a round of international condemnation. Last week the military banned some foreign activists from leaving the country.

The Brotherhood has called for an end to protests, to allow the military to follow its stated timetable of handing over power after presidential elections in June.

Liberal and secular activists who led last year's popular uprising that toppled President Hosni Mubarak's regime failed to win significant strength in the parliament, and they are suspicious of the Brotherhood, suspecting that the veteran Islamist movement is working with the military.

The clashes were the second between the young protest groups and Brotherhood supporters in recent days. The escalating violence raised concerns that the political differences might turn into bloody confrontations.

The Brotherhood website said its members showed self-restraint as protesters pelted them with rocks and water. The Health Ministry said more than 100 people were injured, including some with broken bones.

This Brotherhood's statement Wednesday in response to the violence was unusually strong. Secular activists, who demand an immediate transfer of power said it echoed the language of the military, which they accuse of perpetuating the repressive tactics of the Mubarak regime.

"The parliament has become the real representative of the Egyptian people," the Brotherhood statement by email said, calling on the military to protect the parliament, state institutions and the military itself "which some of these (protest) groups think must be brought down."

Brotherhood spokesman Mahmoud Ghozlan said the protesters are mostly those who were unhappy with the Brotherhood's success in the parliament.

"They have no popularity ... Is it valid that they receive funds to create chaos to bring down the parliament?" Ghozlan said. "This is chaos. It is not about democracy."

Heba Ghannam, one of the protesters, said that after making it to the side of the Brotherhood supporters as part of a women's group trying to stop the clashes, she was beaten.

"We were coming from behind the Brotherhood supporters. They started beating us," she said.

"One of them took out a belt and beat me with it. It was really ugly." She said other female protesters were beaten on the head.

Abdel-Rahman Ouda, a 32-year old Brotherhood supporter in front of the parliament, denied his group beat anyone. He said he was hit in the head by a stone, causing a large gash. "It was a very vicious attack," he said.

Last week, Brotherhood supporters and secular protesters hurled bottles and rocks at each other and scuffled in Cairo's Tahrir Square during a demonstration.