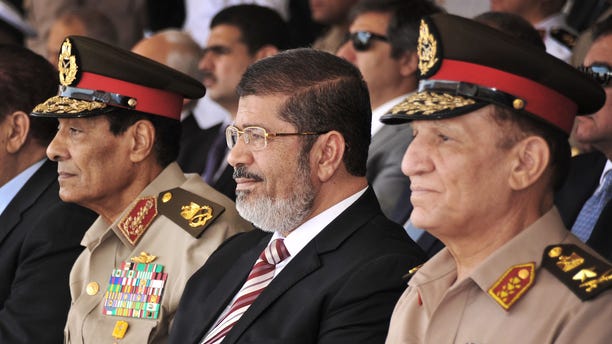 July 5, 2012: In this file image released by the Egyptian President, Egyptian Field Marshal Gen. Hussein Tantawi, left, new President Mohammed Morsi, center, and Armed Forces Chief of Staff Sami Anan, right, attend a medal ceremony, at a military base east of Cairo, Egypt. The spokesman for Egypts president says Mohammed Morsi, the countrys Islamist leader, has decided to retire the head of the Armed Forces and minister of Defense and chief of staff. (AP/Egyptian Presidency)

Egypt's military signaled its acquiescence Monday to the president's surprise decision to retire the defense minister and chief of staff and seize back powers that the nation's top generals grabbed from his office.

President Mohammed Morsi's shake-up of the military on Sunday took the nation by surprise. It transformed his image overnight from a weak leader to a savvy politician who carefully timed his move against the military brass who stripped him of significant powers days before he took office on June 30.

A posting on a Facebook page known to be close to the country's former military rulers said the changes amounted to the "natural" handing over of leadership to a younger generation.

"A greeting from the heart filled with love, appreciation and respect to our leaders who passed on the banner. They will be in our eyes and hearts," said the posting. "The armed forces is a prestigious institution with a doctrine of full discipline and commitment to legitimacy."

Egypt's official news agency quoted an unnamed military official late Sunday as saying there has been no "negative reaction" from within the military. And a day after the orders, no unusual military movements were detected anywhere across the nation.

If Morsi's decisions go unchallenged, it should end the power struggle that pitted him against the powerful military. That could mean the ushering out of six decades of de facto military rule since army officers seized power in a coup in 1952. But removing the defense minister and chief of staff does not necessarily mean that the military, Egypt's most powerful institution, has been defeated or that it would give up decades of perks and prestige without a fight.

Morsi has been locked in a power struggle with the military since he took office on June 30. But after militants killed 16 Egyptian soldiers a week ago at a border post with Israel in Sinai, he has sought more aggressively to assert his authority over the top generals.

He fired the nation's intelligence chief a few days after the Sinai attack and made two highly publicized visits to Sinai in the company of top commanders. He also chaired several meetings with the military brass and made a point of calling himself the supreme commander of the armed forces in televised speeches.

On Sunday, he ordered the retirement of Defense Minister Field Marshal Hussein Tantawi and Chief of Staff Gen. Sami Annan. But he appointed them as presidential advisers and awarded them some of the nation's highest honors -- something that suggested they agreed, perhaps grudgingly, in advance.

Morsi's Muslim Brotherhood, a fundamentalist Islamist group, won both parliamentary and presidential elections in the first free and fair votes in Egypt's modern history. The group had been repressed under Mubarak, who ran a secular state.

The Supreme Council of the Armed Forces (SCAF), which ruled Egypt for 17 months after Mubarak was forced out, stripped the presidency of many of its key powers before it handed the office to Morsi. Tantawi was the head (SCAF) and Annan was No. 2. Tantawi was also Mubarak's defense minister for two decades before the regime was ousted.

Days before Morsi's inauguration, the SCAF decreed constitutional amendments that gave them the power to legislate after they dissolved parliament, as well as control over the national budget. It also gave them control over the process of drafting a new constitution. The generals had put themselves in charge of all defense and foreign policy, including the appointment of the defense minister.

With his latest move, Morsi reclaimed the powers taken from him, seizing back sole control of the constitution drafting process and the right to legislate.

The two men appointed to replace the top military commanders were also members of the SCAF -- something that could indicate either the military's agreement to the shuffle or splits at the highest level of the armed forces. Lt. Gen. Abdel-Fattah el-Sissi replaced Tantawi and Lt. Gen. Sidki Sayed Ahmed replaced Annan.

Morsi may have tapped into divisions and the generation gap within the top echelons of the military. Tantawi is 76 and he was in that job for more than 20 years. His replacement, former military intelligence chief Lt. Gen. Abdel-Fattah El-Sissi, is 58.

Egypt's first civilian president acted at a moment when the military was humiliated over a major security failure in Sinai, the deadliest internal attack on soldiers in modern history. Several days before the killings, Israel warned that an attack was imminent. The intelligence chief was sacked after it emerged in Egyptian media that he knew of the Israeli warning but did not act.

Sinai has been plunged into lawlessness and the rest of the country has seen a sharp deterioration in security while the military ruled.

The military has a vast economic empire that accounts for about 25 percent of GDP. But the military was tainted in the 17 months they ran the country after Mubarak's ouster, with the SCAF accused of mismanaging the transitional period and committing human rights violations.

Morsi's moves could heighten fears in Egypt and abroad that the U.S.-educated Islamist leader may have accumulated too much power in his hands and those of the Mulsim Brotherhood, his fundamentalist group.

Some are anxious that Egypt will only move from an authoritarian state to an Islamic state.