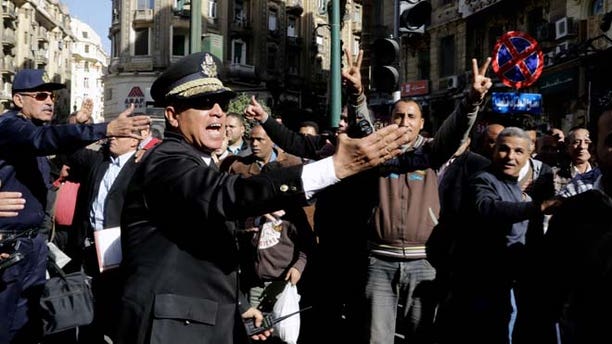 Jan. 29, 2015: Egyptian police try to clear the street where women rally at the spot where Shaimaa el-Sabbagh, a 32-year-old mother, was shot in downtown Cairo on Saturday near Talaat Harb Square, during a protest in Cairo, Egypt. (AP)

Rights group Amnesty International on Sunday accused Egyptian authorities of intimidating witnesses and whitewashing evidence to cover up the role of security forces in the killing of more than two dozen people during protests last week.

The London-based Amnesty said at least 27 people were killed over three days during protests commemorating the fourth anniversary of the uprising against longtime autocrat Hosni Mubarak. It said police used excessive force or failed to break up clashes between protesters and residents.

Those killed included a female protester, Shaimaa el-Sabbagh, whose shooting as police dispersed a small, peaceful protest was captured in widely-shared footage. A 17-year-old female protester and a 10-year-old were killed during clashes with police in Cairo and Alexandria. Two security men were also killed in the violence.

Based on testimony from protesters, lawyers, witnesses and video footage, Amnesty said security forces used excessive force, repeatedly firing tear gas, birdshot and sometimes bullets "at random into crowds of protesters and bystanders who were posing no threat."

It also said some among the protesters were armed.

"Harrowing scenes of protesters dying on the streets of Cairo are likely to be regularly repeated, given authorities' total failure to hold security forces to account for human rights violations," the group said.

Amnesty said hundreds of protesters have been rounded up and placed in informal detention facilities. It said some had no access to their lawyers for more than 24 hours, a violation of Egyptian law.

Amnesty said prosecutors have ordered witnesses to the killing of el-Sabbagh detained for taking part in unauthorized protests, a move it said was apparently aimed at intimidating them. A lawyer in el-Sabbagh's case said a leading member in her political party was detained overnight and treated as a suspect even though he went in to testify. He has since been released, the lawyer said, but still faces accusations of taking part in an unauthorized demonstration.

Egyptian officials did not immediately comment on the report. Authorities say they are cracking down on violent protests aimed at destabilizing the country, as they fight a rising wave of militant attacks.