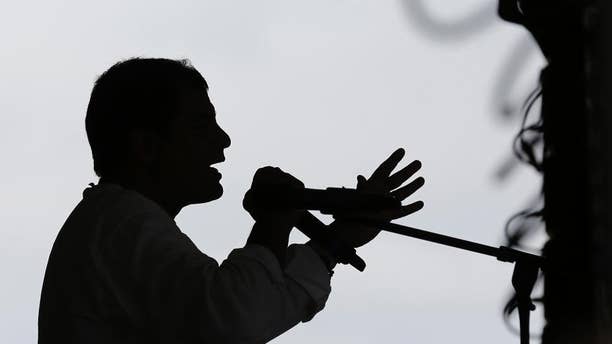 FILE - In this Jan. 16, 2014 file photo, Ecuador's President Rafael Correa speaks at the opening of the Comunidad del Milenio Panacocha in Ecuador's Amazon region. Far from laughing along with those who poke fun at him on social media, President Rafael Correa has created a website and Twitter account to marshal digital counterattacks by his supporters against the “defamers.” “For every lying tweet that they send out, we will send 10,000 that are truthful,” Correa said Saturday, Jan. 31, 2015 in his weekly TV appearance. (AP Photo/Dolores Ochoa, File) (The Associated Press)

Far from laughing along with those who poke fun at him on social media, President Rafael Correa has created a website and Twitter account to marshal digital counterattacks by his supporters against the "defamers."

"For every lying tweet that they send out, we will send 10,000 that are truthful," Correa said Saturday in his weekly TV appearance.

To critics, the campaign is simply the latest salvo in the war on freedom of expression by a president they see as thin-skinned and whom human rights groups criticize as intolerant.

Since 2012, Correa has secured a $42 million criminal libel award against the country's main opposition newspaper, forced top political cartoonist Javier Bonilla to "correct" his work and secured passage of a new media law that made a government panel the arbiter of journalistic fairness.

Cesar Ricuarte, director of the Fundamedios press freedom watchdog, said Correa has anointed himself "the owner of humor," by trying to "tell Ecuadoreans what should make us laugh."

Correa's decision to move decisively against satirical "memes" — images that become instant online sensations — was a reaction in part to an online satirist who goes by Crudo Ecuador. Last week, he became a first target of the new government website, www.somosmas.ec , meaning "We are more," and its affiliated Twitter account.

In jabs at Correa, Crudo Ecuador had posted on Facebook:

A photo of the leftist president holding a shopping bag at a "luxury" European mall just as Ecuadoreans face potential belt-tightening over the plunge in price of oil, their main export.

In another image, Correa stands beside the giant presidential portrait bestowed on him Jan. 6 in China, where he obtained $7.5 billion in badly needed loans. In the image's "Part II," the portrait has changed. Correa, pictured from chest to knees, turns out empty pants pockets. The title is "Ecuador's Current Economic Situation."

Correa was not amused.

Crudo Ecuador's author denies the president's claim that he's a hired gun of one of Correa's opponents.

"I've been a jokester all my life," he told The Associated Press. "If I were getting paid, I wouldn't have credit card debts."

He said he's voted for the leftist economist, who is highly popular for his social welfare spending, and thinks he'll vote for him again.

"He's the least bad of Ecuador's politicians," said the man, who spoke on condition of anonymity out of fear for his safety, preferring the nickname Crudo, which is synonymous with unrefined petroleum.

Crudo, who says he works in advertising, said he isn't afraid of the president. (He's now got some 36,300 Twitter followers versus fewer than 4,900 for @somosmasec). It's Correa fanatics who worry him.

He showed the AP a Twitter message that threatened to "find you and give you what you deserve, beginning with your family."

Justice Minister Jose Serrano has urged him to complain and said the government would investigate.

The landing page of www.somosmas.ec features a registration form and the slogan "We are with you, comrade president." It calls itself a "community in support of the citizen's revolution."

While the new social media campaign is quite public, some opponents of Correa say his government has been privately using underhanded tactics for months to try to stifle online criticism.

One has been to employ a Barcelona, Spain company, Ares Rights SL, to invoke intellectual property rights in demanding that certain high-profile Correa critics take down online content including logos of the governing Alianza Pais party, its targets say.

Two critics of the government, Diana Amores and Carlos Andres Vera, say they are among the targets.

Twitter suspended each of their accounts three times in the past year, they say, on the basis of complaints. Each suspension lasted from a day to a week before Twitter apparently deemed the complaints unfounded.

In Amores' case, however, a database maintained by Twitter of complaints by governments confirms a Barcelona-based company last year sought to shut it down. Four were on behalf of Alianza Pais, one on behalf of state-run TV. The complaints claimed violations of the U.S. Digital Millennium Copyright Act.

Ares Rights did not respond to email requests and a working telephone number could not be located for the company.