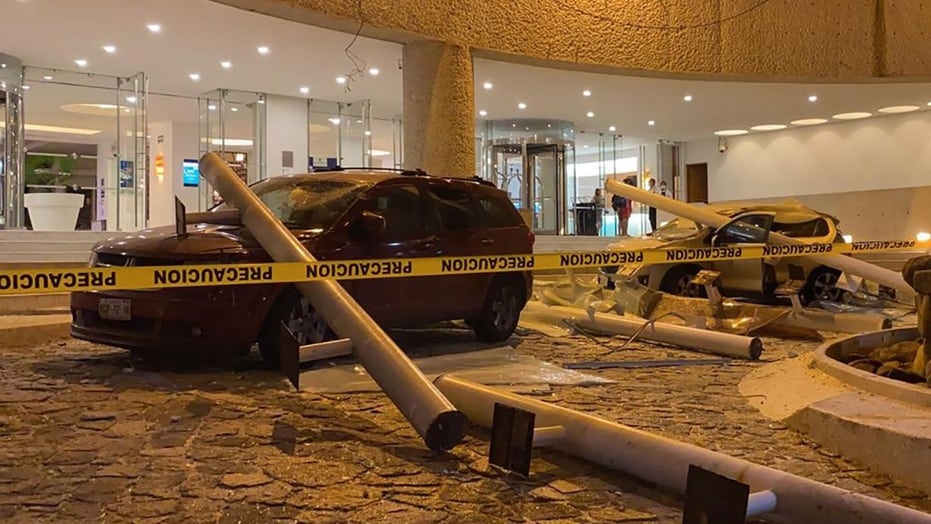 A 7.0 magnitude earthquake rattled the southwest region of Mexico late Tuesday, killing at least one person, and prompting local leaders to appeal for calm in communities impacted.

Social media images showed buildings swaying and people standing outside their homes trying to keep their balance during an apparent aftershock.

"There are nervous breakdowns, people are worried because there have been aftershocks," Adela Román, the mayor of Acapulco, told television news outlet Milenio. She said there are "many gas leaks in many places" as well as some landslides and fallen walls.

A couple walks past a taxi cab that was damaged by falling debris after a strong earthquake in Acapulco, Mexico, Tuesday, Sept. 7, 2021. (AP Photo/ Bernardino Hernandez)

Héctor Astudillo, the governor of Guerrero state, said at least one person was killed after being struck by a falling light post in a town northwest of Acapulco, according to the Wall Street Journal.

EXPLAINER: WHY HAITI IS PRONE TO DEVASTATING EARTHQUAKES

The U.S. Geological Survey said the quake was centered about 10 miles northeast of Román's city.

View of damaged cars outside a hotel after a quake in Acapulco, Guerrero state, Mexico on September 7, 2021. (Photo by FRANCISCO ROBLES/AFP via Getty Images)

The quake was so powerful, it caused buildings to rock and sway in Mexico City, nearly 200 miles away. The ground shook for nearly a minute in some parts of the capital and some people evacuated their buildings.

People gather outside on the sidewalk after a strong earthquake was felt, in the Roma neighborhood of Mexico City, Tuesday, Sept. 7, 2021.  (AP Photo/Leslie Mazoch)

Mexico City authorities added there were no early reports of significant damage in the city, though they said electricity was knocked out in some neighborhoods.

"We heard loud noise from the building, noise from the windows, things fell inside the house, the power went out," said Sergio Flores, an Acapulco resident. "We heard leaking water, the water went out of the pool and you heard people screaming, very nervous people."

Medical staff move patients out of a hospital after an earthquake in Mexico City, capital of Mexico, on Sept. 7, 2021. (Photo by Sunny Quintero/Xinhua via Getty Images)

Before the first death was reported, President Andrés Manuel López Obrador said on Twitter that authorities in the four states that most felt the earthquake told him there were no victims or serious damage beyond some collapsed walls and falling rocks.

Locals sit on a sidewalk after a strong earthquake in Acapulco, Mexico, Tuesday, Sept. 7, 2021. The quake struck southern Mexico near the resort of Acapulco, causing buildings to rock and sway in Mexico City nearly 200 miles away. (AP Photo/ Bernardino Hernandez)

Around 1.6 million customers were estimated to be without power in Mexico City and the states of Mexico, Guerrero, Oaxaca, and Morelos, the Federal Electricity Commission (CFE) said in a statement.

Mexico’s National Civil Defense noted it was conducting reviews in 10 states following the earthquake. The threat of potential waves has passed, according to the Pacific Tsunami Warning Center.

Tuesday's earthquake occurred four years to the day after a magnitude-8.2 earthquake that struck off the coast of Mexico's southern state of Chiapas, largely destroying the town of Juchitan in neighboring Oaxaca state and killing dozens.