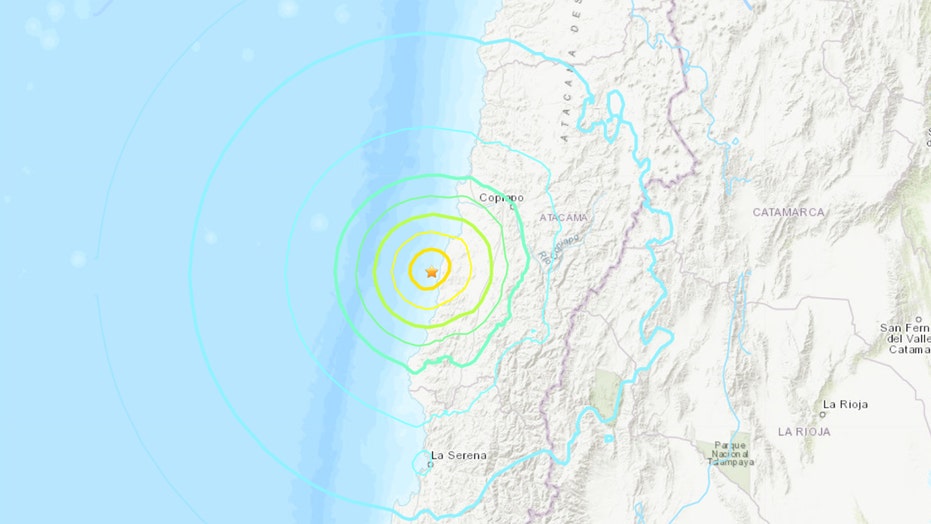 A strong earthquake struck off the coast of northern Chile on Tuesday, with some minor damage and landslides reported, according to officials.

The U.S. Geological Survey (USGS) said the magnitude 6.8 earthquake struck just after midnight at a depth of 14 miles. The temblor was centered 48 miles northeast of the Atacama city of Vallenar.

A few minutes later, a second quake occurred with a preliminary magnitude of 6.3.

The quake was felt as far south as the capital, Santiago, and in Antofagasta, 826 miles further north.

The magnitude 6.8 earthquake struck just after midnight about 48 miles northeast of the Atacama city of Vallenar.  (USGS)

The Chilean Navy said there was no possibility of a tsunami, but some damage was reported in the area.

The National Emergency Office of the interior ministry told Reuters there had been some localized power cuts and rubble covering roads around the region.

A swimming pool on the roof of an apartment block in the city of Copiapo in the Atacama desert had also reportedly overflowed.

Video from the scene showed windows rattling and items falling to the ground.

Electricity was also briefly cut off in the area, but there were no immediate reports of casualties or major damage.

Dozens of aftershocks were also reported around the Huasco region, midway between regional capital La Serena and Copiapo.

Chile is located along the volatile Ring of Fire seismic fault system that circles the Pacific Ocean and often experiences large earthquakes.