At least three of the 52 Palestinians reportedly killed Monday in clashes ahead of the Jerusalem opening of the U.S. Embassy to Israel were “armed terrorists” caught trying to plant a bomb near the Gaza border fence, Israel's military said.

More than 35,000 protesters amassed at a dozen locations along the security fence, with many engaging in skirmishes that pushed the death toll Monday to the highest in Gaza since a 2014 cross-border standoff between the militant group Hamas and the Jewish state, according to the Associated Press.

Gaza health officials told the news agency that 52 people so far have been killed in Monday’s violence, and at least 1,200 have been wounded. 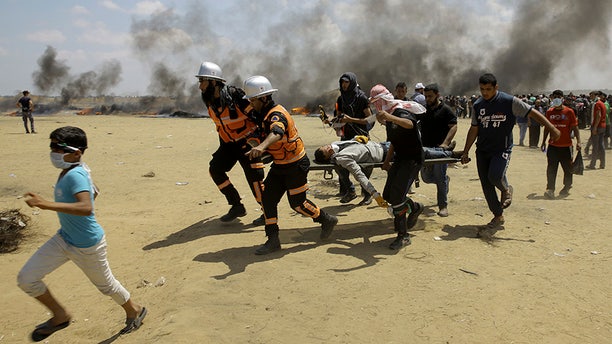 May 14, 2018: Palestinian medics and protesters evacuate a wounded man during a protest at the Gaza Strip's border with Israel, east of Khan Younis, Gaza Strip. (AP)

The relocation of the embassy from Tel Aviv, a key campaign promise of President Trump, has infuriated the Palestinians, who seek east Jerusalem as a future capital.

“An IDF patrol foiled a bomb-laying attack by a cell of three armed terrorists near Rafah, close to the border,” the Israeli military said Monday. “This is a particularly violent protest point. The troops responded with fire at the terrorists. The terrorists were killed.”

Israel also said its aircraft targeted a Hamas post in Jabaliya after troops in the area came under fire. None of the Israeli soldiers were hurt. Later in the day, Israel's Defense Forces (IDF) said a fighter jet struck five Hamas military training facilities in northern Gaza.

“Rioters are hurling pipe bombs and firebombs at IDF troops, burning tires, throwing stones and burning objects, with the intention of setting fires in Israel and hurting IDF troops,” a member of the Israeli army was quoted by The Times of Israel as saying.

Footage posted online by the IDF purportedly showed Palestinians pressed up against the border fence throwing over objects that were on fire.

The demonstrations Monday -- dubbed the "Great March of Return" by Palestinian media -- are reported to be part of a campaign led by Hamas to break the decade-old border blockade of the territory imposed by Israel and Egypt after Hamas seized control of Gaza in 2007. Since weekly border marches began in late March, dozens of Palestinian protesters have been killed and more than 2,300 wounded in clashes.

Israel’s security service, Shin Bet, claimed Monday that Hamas is encouraging Palestinian civilians to flood the border, with their own gunmen waiting in the wings to break through if a fence is breached.

Shin Bet said it received that information during interrogations of members who already have been captured after crossing the security fence in recent weeks, The Times of Israel reported. 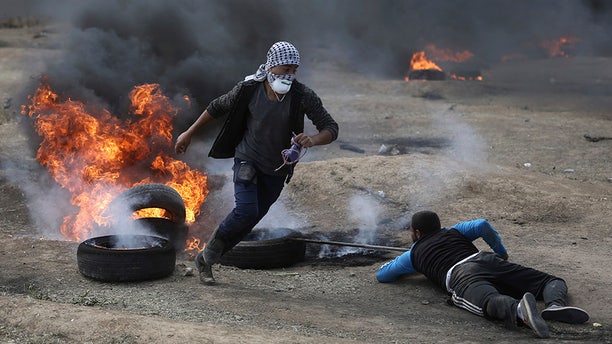 May 14, 2018: Palestinian protesters burn tires during a protest on the Gaza Strip's border with Israel. (AP)

“There is a prohibition for Hamas operatives to approach the border, from a fear that they will be killed or captured by IDF troops, unless the security fence falls and then they must enter, armed, into Israel under the cover of the masses and carry out terror attacks,” the agency said. “From the information we have, it appears Hamas is encouraging and sending protesters to the border fence in order to carry out violent acts and damage security infrastructure.”

Shin Bet also claimed that Iran is providing funding to Hamas for these border flare-ups, but did not elaborate.

A senior figure in the group, designated a terrorist organization by the U.S., said Monday that the border protests will continue until Palestinians have won back their rights.

"We will continue on this path until the rights of the Palestinian people are achieved,” Ismail Radwan said, according to the Associated Press.

Lt. Col. Jonathan Conricus, an Israeli military spokesman, said the army had set up additional "layers" of security in and around communities near the border to defend Israeli civilians in case of a mass breach. He said there already had been several "significant attempts" to break through the fence.

"Even if the fence is breached, we will be able to protect Israeli civilians from attempts to massacre or kidnap or kill them," he said.

In the West Bank, several thousand people gathered in the center of Ramallah, while hundreds marched to the Qalandiya crossing on the outskirts of Jerusalem, where protesters threw stones at Israeli troops.

The U.S. said it chose today's date for the embassy opening to coincide with the 70th anniversary of Israel's establishment. 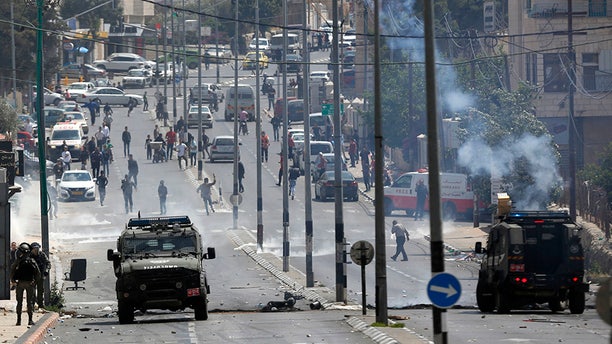 May 14, 2018: Palestinians clash with Israeli troops following a protest against the opening of the U.S. embassy in Jerusalem, in the West Bank city of Bethlehem. (AP)

But it also marks the anniversary of what Palestinians call their "nakba," or catastrophe, a reference to the uprooting of hundreds of thousands who fled or were expelled from what is now Israel during the 1948 war surrounding Israel's independence.

Most of the casualties Monday were in the southern Gaza towns of Khan Younis and Rafah. Israeli forces were firing volleys of tear gas to disperse the crowds, and the sound of heavy gunfire could be heard. Sirens were constantly wailing as the wounded were evacuated on stretchers to nearby ambulances. Groups of young activists repeatedly approached the fence, but were quickly scattered by gunfire and tear gas.

In one of the border areas east of Gaza City, Mohammed Hamami, a 40-year-old civil servant, joined a crowd of hundreds of protesters, along with his mother and five children.

"Today we are here to send a message to Israel and its allies that we will never give up on our land," he told the Associated Press.

Clouds of black smoke from burning tires was also seen rising into the air. Earlier Monday, Israeli drones dropping incendiary material had pre-emptively set ablaze some of the tires collected in advance by activists.

Protesters have used the thick smoke as cover against Israeli snipers perched on high sand berms on the other side of the border. The army accuses Hamas of using the protests as cover to plan or carry out attacks.

Leaflets dropped over Gaza by army jets warned that those approaching the border "jeopardize" their lives. The warning said the army is "prepared to face all scenarios and will act against every attempt to damage the security fence or harm IDF soldiers or Israeli civilians."

Kuwait on Monday called for an emergency U.N Security Council meeting Tuesday to discuss the violence.