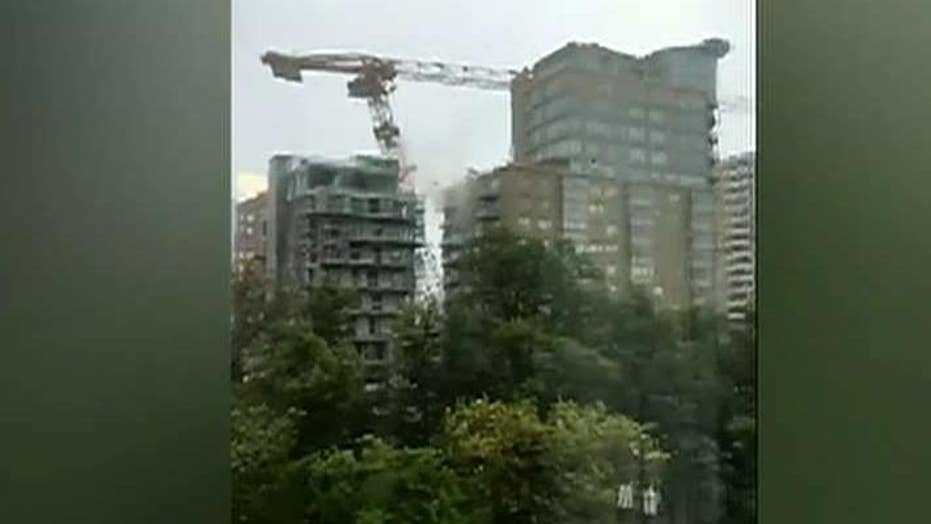 The storm’s powerful winds and heavy rain toppling a massive crane onto an apartment building in Nova Scotia.

After causing devastation across the Bahamas and wreaking a path of destruction along North Carolina's Atlantic Coast, Dorian blasted the Canadian Maritimes Saturday with powerful winds that caused a massive crane to crash into a building under construction amid torrential rain.

Dorian, now a post-tropical cyclone, is located about 55 miles east-northeast of Anticosti Island in the eastern part of the country Sunday morning and had top sustained winds of 80 mph, according to the National Hurricane Center in Miami. It was heading to the north-northwest, roughly up the Gulf of St. Lawrence.

The storm is still bringing hurricane-force winds over portions of Nova Scotia, and conditions are expected to deteriorate in Newfoundland later Sunday.

Dorian made its fourth landfall Saturday evening about 15 miles south of Halifax, Nova Scotia, a city of about 400,000 people. The storm has left about a half a million customers without power, and left Halifax bearing the brunt of the impact.

High winds caused a massive crane to topple and crash onto an under-construction high-rise in downtown Halifax, stunning nearby residents.

"I was so shocked," said Fatema Ali, who told CBC News she captured the dramatic scene on video from her apartment across the street. "My hands were shaking."

In the city's south end, a roof was ripped off an apartment complex, and firefighter Jeff Paris told the Associated Press several apartment buildings were being evacuated. With the collapsed crane and all the downed trees and power lines, it's fortunate there are no significant injuries or deaths, he said.

"The power went out hours ago, but we were well prepared," said Tim Rissesco, who lives on the east side of Halifax Harbor in Dartmouth. "We've got snacks and food and we're hunkered down in the house playing board games and watching the rain and the wind."

Significant storm surge was reported in Halifax Harbor and along with parts of New Brunswick's eastern coastline, according to CTV News.

Nova Scotia Power Inc. reported more than 300,000 customers were in the dark by 7 p.m., with the power out in parts of Halifax, Prince Edward Island, and New Brunswick.

Karen Hutt, the utility's chief executive, said Dorian is the largest weather event the company had ever responded to, and 1,000 workers were ready to restore power once working conditions are safe.

Hurricanes in Canada are somewhat rare, in part because once the storms reach colder Canadian waters, they lose their main source of energy. The last hurricanes to make landfall in Canada were Hurricane Igor and Hurricane Earl in September 2010, according to Canadian Hurricane Centre meteorologist Ian Hubbard.

Crews race to rescue Hurricane Dorian survivors in the Bahamas

As the storm finally moving away from the Atlantic Coast, authorities in the Bahamas were scrambling to find shelter for tens of thousands left homeless by a storm that struck with Category 5 force one week ago.

The storm has been blamed for nearly 50 deaths, but government officials have said they expected the death toll to rise.