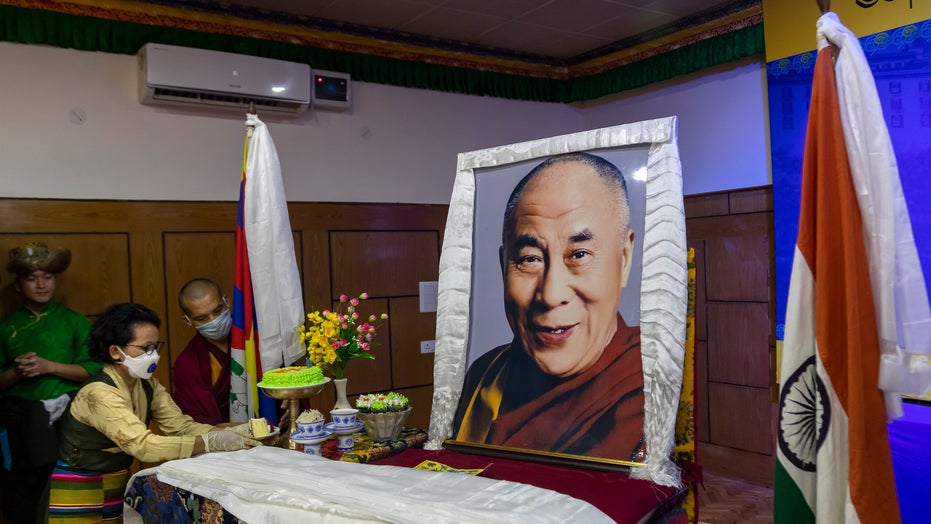 The Dalai Lama, the exiled spiritual leader of Tibetan Buddhism, celebrated his 85th birthday Monday with the release of an album of mantras and teachings.

"Inner World" begins with the track "One Of My Favourite Prayers" and has the 14th Dalai Lama, Tenzin Gyatso, reciting meditations and sayings with accompanying music. The project came about after one of his students contacted him in 2015 with the idea, Reuters reports.

CHINA INTERFERENCE IN SUCCESSION OF NEXT DALAI LAMA SLAMMED BY SEN. RISCH

On Tuesday, His Holiness thanked followers and friends around the world who joined him remotely in celebrating his birthday.

An exile Tibetan offers a piece of cake to a portrait of her spiritual leader the Dalai Lama to mark her leader's 85th birthday in Dharmsala, India, Monday, July 6, 2020. (AP Photo/Ashwini Bhatia)

"I am touched by your affection," he said in a letter. "I am in good health and look forward to live long to continue being of some service to humanity."

He reflected on the "oneness of humanity" today amid the coronavirus and other issues.

OUTRAGE AFTER CALIFORNIA BANS SINGING IN CHURCHES AMID CORONAVIRUS PANDEMIC

"Climate change and the current pandemic, which threaten us all, are challenges that teach us that we must work together, making a concerted effort to reach our common goal of a more caring and more peaceful world," the Dalai Lama concluded.

The celebration of another year comes as Buddhists around the world worry about China trying to interfere with the succession of the next Dalai Lama.

The Chinese foreign ministry declared in 2011 that only the government in Beijing can appoint the next Dalai Lama and no other succession candidate would be given any recognition.

But at the end of last year, senior Buddhist priests, representing all schools of Tibetan Buddhism, unanimously endorsed the Dalai Lama's sole authority to choose his successor at a conference.