Cuban, US doctors at odds over jailed American's health 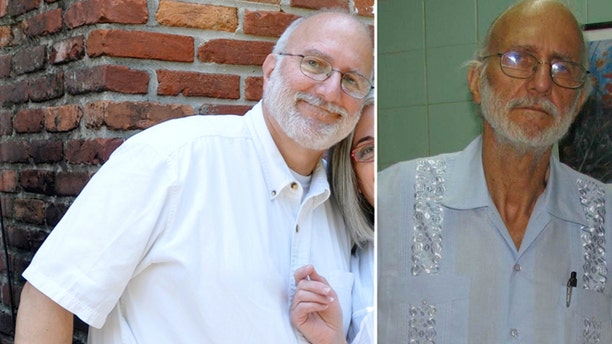 The Cuban government said Wednesday that a test shows an American imprisoned in Cuba doesn't have cancer, countering a previous statement by a US doctor that a mass on his shoulder should be assumed to be cancerous unless proven harmless.

Both sides have spent the past several months going back and forth about the health of Alan Gross, who has been in prison in Cuba for nearly three years. Gross, 63, has had a mass on his shoulder since May. Overweight when he was arrested, he has also lost more than 100 pounds since being in prison. Gross' lawyer and family want to be able to choose a doctor to examine him. The Cuban government has said his health is fine.

Cuban officials said in a statement Wednesday that Cuban and American officials met Monday to discuss Gross' health. During the meeting officials discussed in part an Oct. 24 biopsy that confirmed that a lump on Gross' right shoulder is not cancerous, the one-page statement from Cuba's Ministry of Foreign Affairs said. The statement said the test "could not be performed before due to Mr. Gross' refusal" and that Gross' wife, a resident of the District of Columbia, was given the test results during a meeting in Washington on Monday.

The Cuban medical team treating Gross said "the general health condition of Mr. Gross is normal" though he is being treated for "chronic illnesses that are typical of his age."

A radiologist from Maryland who reviewed tests performed on Gross in Cuba before the biopsy had said they were inadequate and suggested both an MRI and possibly a biopsy. On Wednesday the same doctor, Alan A. Cohen, concluded in a letter released to reporters that the results of the biopsy were "hopeful but not definitive." He repeated his suggestion of an MRI and suggested a biopsy using a larger needle.

One of Gross' U.S. lawyers, Jared Genser, also questioned the results of the biopsy and repeated requests that Gross be allowed to choose a doctor to examine him. Genser questioned the public release of medical records without Gross' consent.

Gross has been in prison in Cuba since late 2009. He was working as a U.S. government subcontractor when he was arrested, and his case has become a source of tension in U.S.-Cuba relations.

A New York rabbi who saw Gross on Tuesday also said the growth was not cancerous. Rabbi Elie Abadie, who is a doctor, told The Associated Press in an interview that he had examined Gross and received a lengthy briefing on his health. Gross' lawyer said the value of Abadie's assessment is limited because he is a gastroenterologist. But, he said, if the Cuban government is now allowing American doctors to examine Gross they will have an oncologist apply for a visa to see him.

"We urge the Cuban government to allow this to happen promptly so we can put questions about Mr. Gross's health to rest," Genser said in a statement.

Next week will mark three years since Gross was arrested.