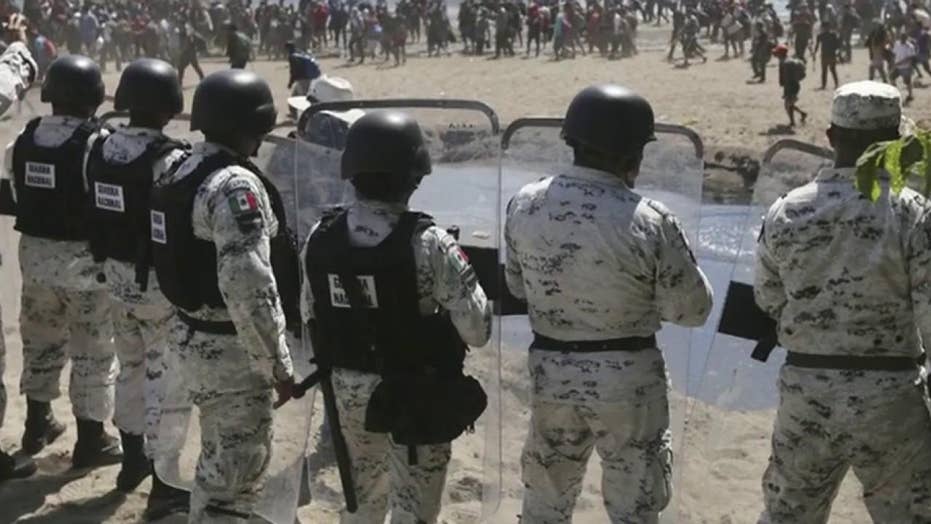 Migrants are still determined to make it to the United States with the latest migrant caravan clashing with Mexican troops after crossing the Guatemala border; U.S. Customs and Border Protection Acting Commissioner Mark Morgan weighs in.

Gang members from El Salvador, Guatemala and Honduras have been hiding amongst the migrant caravans heading to the United States – and have been committing crimes in Mexico along the way, intelligence officials are warning.

Gissell Pérez Artiga, an El Salvador-based representative of the multinational Joint Border Intelligence Group – which the U.S. State Department says includes American personnel – made the assertion during an ongoing security conference in Mexico City, according to the El Universal newspaper.

“We have collaboration agreements with the U.S., Guatemala, and Honduras and it has been possible to identify these people at the border, they camouflage themselves among the victims of human trafficking, the migrants, for they can continue committing crime in the United States and now in Mexico,” the newspaper quoted her as saying.

Migrants walk along a highway in hopes of reaching the distant United States, near Agua Caliente, Guatemala, in January 2020. (AP)

Pérez Artiga added that MS-13 and 18th Street gang members have been identified as being amongst some of two dozen migrant caravans that have left Central America since 2018.

She reportedly said the intelligence group is now working with countries to detain and deport the criminals so they can face the Salvadoran, Guatemalan and Honduran justice systems.

José Antonio Almendáriz Rivas, a Salvadoran lawmaker who also spoke at the same conference, offered an apology to Mexico for the behavior of some of the migrants in the caravans.

“I apologize to our Mexican brothers because the migrants, in those large numbers that left El Salvador, caused you and continue to cause problems for you here," El Universal quoted him as saying.

Fox News reported last year that at least 25 people affiliated with the MS-13 gang were deported from Mexico after they were revealed to be concealed within a migrant caravan of 1,600 Central American migrants just across the U.S. border.

Guatemala, Honduras and El Salvador constitute Central America's so-called Northern Triangle countries that have been responsible for most of the migrants arriving at the United States' Southwest border in recent years.