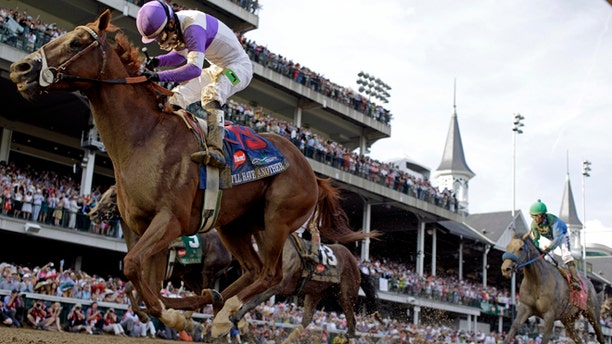 Dirt, an infield and a maze of green-roofed barns and horse stalls separates them from cheering Kentucky Derby fans. Far from the moneyed horse aficionados in the stands, the 200 mostly Hispanics who live at Churchill Downs live a starkly different life in the backside of the tracks.

But now this shadowy world is on display after one of them was found dead shortly after the world famous horse race. Many were left to wonder if a killer was among them: Why did someone want 48-year-old Adan Fabian Pérez dead? How was the Guatemala native killed? And why did his killer leave him in a barn, a few stables away from where I'll Have Another would bask in the glory of winning the Kentucky Derby?

Authorities have no suspects. An autopsy was done, but the coroner refused to release the results.

"Everybody wants to catch the guy who did that," said Faustino Aguilar, a 29-year-old exercise rider with six years of experience at the track. "They do it once, they may do it more."

Jo-Ann Farmer, chief deputy coroner in Louisville, said an autopsy revealed injuries on a body found in a barn at Churchill Downs at about 4:50 a.m. EDT Sunday, roughly 10 hours after the race. Farmer refused to release more details, saying she was withholding information pending the investigation into the death.

The Kentucky Derby is known for stylish hats, lots of bets, mint juleps and wild parties. But separated from the cheering fans are those who live at Churchill Downs at any given time — either in dormitories on the edge of the property or in small apartments above some of the barns themselves. Police said Perez lived in quarters on the track.

A fence topped with razor wire separates the backside from a working-class neighborhood that surrounds the historic racetrack. On Monday, track security kept visitors without credentials outside the fence. But track workers wandered in and out, smoking cigarettes, talking on cellphones, and picking up lunch and gear from their cars.

Laura Belzia, a 38-year-old "hot walker" who's walked horses to cool them down after workouts for five years, said the backside of the track can sometimes be a rough place after the work is done and the lights go out. Belzia described occasional fights, but almost never fatal violence.

Belzia said some of her co-workers may be reluctant to talk to police, either out of fear of the person who committed the crime or because they are in the country illegally.

"Nobody is going to tell what happened," Belzia told The Associated Press. "Sometimes people here ... get scared and quit talking."

Louisville Police Lt. Barry Wilkerson said the death appears to have nothing to do with the Kentucky Derby, but may be related to one of several fights reported that night.

"Was he (Perez) involved?" Wilkerson asked Monday. "We're not sure and that's why we're trying to get individuals who saw the altercation or know what happened to get them to speak to us to find if he was involved or not."

"He (Perez) was a hardworking man who took pride in his job and the horses and has no enemies that we are aware of," the Borel family said in a statement.

By Sunday afternoon, I'll Have Another's owners were partaking in the post-Derby ritual of interviews and photo shoots and talking about racing the 3-year-old at the Preakness Stakes in Maryland. On Monday, the hoopla had faded, as trucks and horse trailers bearing license plates from Kentucky, Arkansas, Louisiana, New York and Illinois passed through the gates. Employees finished their morning shifts giving horses their workouts.

Carlos Gomez, a 28-year-old exercise rider, said workers were talking about Perez's death, but it wasn't disrupting their work with the horses.

"Nobody knows what happened," Gomez said.

Fernando Espinoza, a 27-year-old exercise rider for three years at the track, cleaned mud out from his Ford Explorer in a parking lot across from the backside Monday morning. Perez's death, Espinoza said, didn't stop the workers from going about their jobs — arriving at 5 a.m., feeding and walking the horses and readying them for workouts.

"It's a good job. I like horses," said Espinoza, who wore a purple "Stay Thirsty" cap from the 2011 Kentucky Derby. "It's normal now."