Outgoing Secretary of State Mike Pompeo pressed the incoming Biden administration on Tuesday to take the Chinese Communist Party seriously as an "existential" threat to the country, saying the "American people are counting on it."

In an exclusive interview with "America Reports," Pompeo praised what he called President Trump's efforts to identify the threat China posed to American interests, in contrast with President-elect Joe Biden's past dismissals of the world's largest country as serious competition.

"The threat from the Chinese Communist Party is real," Pompeo said. "It is existential to the United States. We have to get this right. I am counting on the next administration continuing our work, continuing to build out on the things that we have done in the exact way that the American people will demand. I have great confidence that the American people have come to understand this challenge from the Chinese Communist Party. I will expect every leader, whatever political stripe, to continue to protect and secure American freedoms."

US COUNTER-INTEL CHIEF WARNS BIDEN ADMIN OF CHINA'S MALIGN FOREIGN INFLUENCE: 'ONE OF THE BIGGER CHALLENGES'

Anthony Blinken, Biden's pick to succeed Pompeo at the State Department, wrote in the opening statement for his confirmation hearing Tuesday that the U.S. should exercise "humility" in its foreign policy. Asked if he feared Blinken would begin with a so-called "apology tour," Pompeo replied, "I hope not."

"I'm proud of this country," he said. "This is the most exceptional nation in the history of civilization. I'm proud of the work the Trump Administration has done in the Middle East, on China. We made life better for people all across the world. We recognize that the people of Iran and North Korea deserved better, and we worked diligently to achieve that. It ought not be an America we should apologize for." 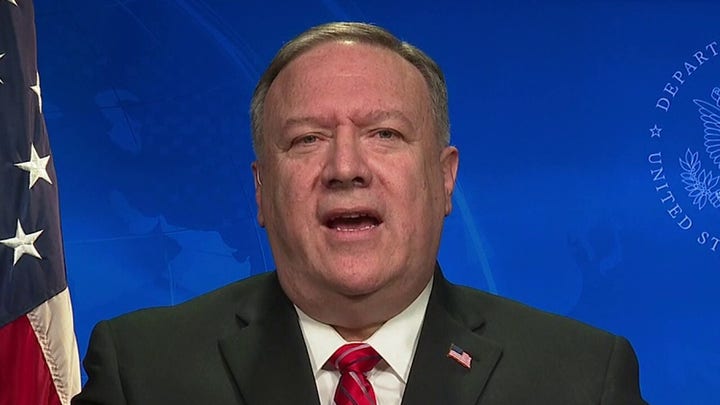 Pompeo spoke the same day the U.S. formally labeled China's systemic oppression of the ethnic minority Uighur Muslims in western China as "genocide." The action by the U.S. could precipitate further sanctions against China under a Biden administration.

Pompeo told Fox's John Roberts the U.S. did not take making the heinous charge lightly. China has put the Uighurs in labor camps and forced them into hard labor, sterilizations, and abortions, according to officials.

"We wouldn't have done this if we weren't convinced that this determination that I issued today was proper, appropriate and would hopefully lead to better lives for people in this region," Pompeo said.