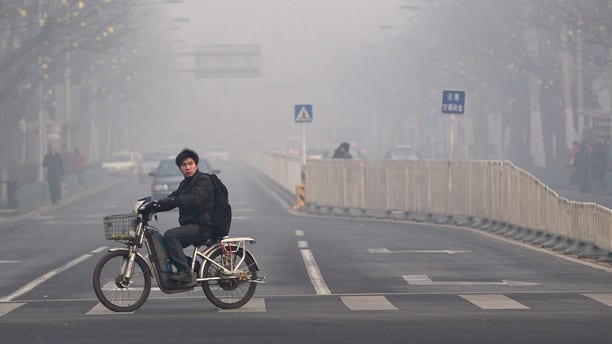 Jan. 10, 2012: A man rides an electric bike crossing a street shrouded by haze in Beijing. A senior Chinese environmental official told foreign embassies on Tuesday, June 5, 2012 to stop publishing their own reports on air quality in China, a clear reference to a popular U.S. Embassy Twitter feed that tracks pollution in smoggy Beijing. (AP)

China told foreign embassies Tuesday to stop publishing their own reports on air quality in the country, escalating its objections to a popular U.S. Embassy Twitter feed that tracks pollution in smoggy Beijing.

Only the Chinese government is authorized to monitor and publish air quality information and data from other sources may not be standardized or rigorous, Wu Xiaoqing, a vice environmental minister, told reporters.

China has long taken issue with the U.S. Embassy's postings of hourly readings of Beijing's air quality on a Twitter feed with more than 19,000 followers since 2008. But its past objections were raised quietly. U.S. consulates in Shanghai and Guangzhou also post readings of the cities' air quality on Twitter.

The Twitter feeds were operating normally Tuesday, and an embassy spokesman in Beijing said the air quality reports were meant to inform Americans living in the three Chinese cities.

In Washington, State Department spokesman Mark Toner said the U.S. had no plans to stop providing the service.

"You know, air pollution, quite frankly, is a problem in many cities and regions in China," he told a news briefing.

The air quality readings in Beijing are based on a single monitoring station within embassy grounds, and pollution levels are rated according to a U.S. Environmental Protection Agency standard that is more stringent than the one used by the Chinese government.

For instance, the U.S. Embassy on Tuesday reported 47 micrograms of fine particulate matter -- particulate matter less than 2.5 micrometers in size, or about 1/30th the width of an average human hair -- in the air and said the level was "unhealthy for sensitive groups." Readings from Beijing Environmental Protection Bureau's 27 monitoring stations ranged between 51 to 79 micrograms but categorized all those levels as "good."

The Beijing government only began reporting PM2.5 earlier this year after long-standing public and international criticism of its lack of transparency about its air quality.

The government appears frustrated that there are now dueling readings for air quality and that the U.S. readings underscore the fact that pollution levels considered unhealthy in the U.S. are classified as good by China.

Wu said it isn't fair to judge Chinese air by American standards because China is a developing country and noted that U.S. environmental guidelines have become more stringent over time.

The standard China uses "takes into account the level of our current stage of development," Wu said.

Wu also said that air quality monitoring by foreign diplomats was inconsistent with the Vienna Convention on Diplomatic Relations and urged diplomats to abide by China's laws and regulations.

It is unclear if other nations monitor and publicize their readings of air quality in Chinese cities, but local Chinese have used the U.S. readings to prod their government into publishing more detailed pollution data.

Later, Chinese Foreign Ministry spokesman Liu Weimin echoed Wu's remarks, saying at a regular press briefing that China objected to the publicity rather than the gathering of the environmental data.

"Of course, if the foreign embassies want to collect air quality information for their own staff or diplomats, I think that is their own matter, but we believe that this type of information should not released to the public," Liu said.

The top environmental official in Shanghai over the weekend also spoke out on the issue, telling local media that an air quality feed launched last month by the U.S. consulate in Shanghai was illegal.

China requires concentrations of PM2.5 to be kept below daily averages of 75 micrograms per cubic meter -- more than twice as lenient as the U.S. Environmental Protection Agency's standard of 35 micrograms.

PM2.5 are believed to be a health risk because they can lodge deeply in the lungs, and have been linked to increased cardiovascular and respiratory diseases as well as lung cancer.