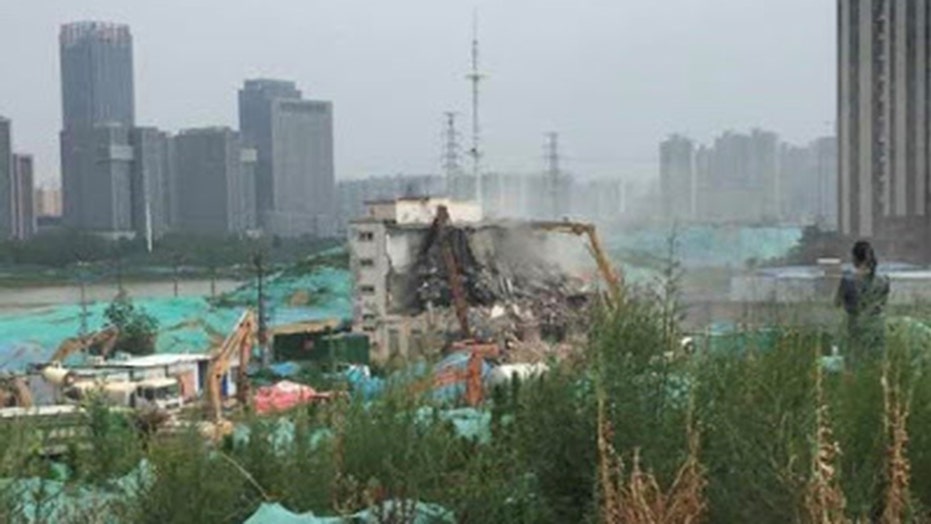 More than 200 Chinese Communist Party officials from different departments brought cranes and heavy-duty machinery and removed chairs and other church property. One church member was taken into custody and two women were beaten and hospitalized after resisting, according to ChinaAid.

The demolition of Sunzhuang Church on June 12. (Courtesy of ChinaAid)

"This is a grave violation of Chinese citizens' right to religious freedom and even of Chinese law, as the Chinese constitution specifies in Article 35 that Chinese citizens should enjoy freedom of assembly, and in the next Article, it says Chinese people should have freedom of religious belief," Brynne Lawrence, ChinaAid English editor, told Fox News. "Such breaches of both law and broader human decency should be universally condemned by members of the free world."

Although the congregation has been part of China's network of government-run churches since the 1990s, the Sunzhuang Village Committee issued a demolition notice in 2013, citing a failure to follow procedures for building a church.

Church officials presented authorities with a certificate showing they obtained prior government approval and, when members held off the demolition, officials cut off the church's electricity and water supply.

"One of the most common forms of Christian persecution in China is church demolition," Lawrence said. "Often, authorities will accuse Christians of not following safety codes or of gathering illegally, but these accusations are usually a front that gives the government permission to take legal action against the church."

She added, "Many demolitions turn violent, with authorities beating protesters, sometimes to the point of hospitalization. In one case, a Christian woman was even buried alive for attempting to stop the demolition of her church. Even those who make it out unharmed can be arrested."