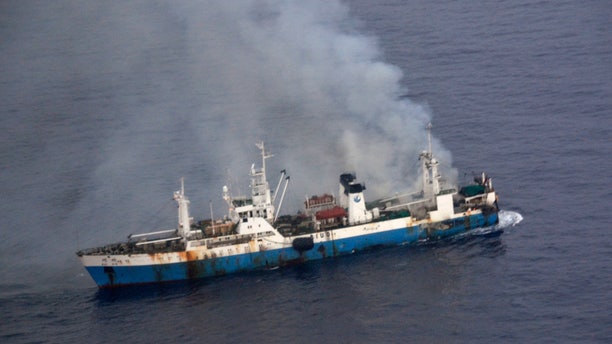 In this picture released by Chile's Air Force, smoke billows from a Chinese factory fishing ship Kai Xin just off the coast of Antarctica, Wednesday, April 17, 2013. Chilean authorities say around 90 crew members have been rescued from the burning ship by the crew of the Norwegian ship Juvel, and Chile’s military says it’s ready to intervene if necessary to prevent an ecological disaster. (AP Photo/Chile's Air Force) (The Associated Press)

A Chilean military tugboat is heading to Antarctica to avoid an ecological disaster where a Chinese fishing ship caught fire.

The Kai Xin vessel burned off the coast of Antarctica Wednesday. Its 97 crew members were rescued by a Norwegian ship close to Chile's research base near the Antarctic peninsula.

Capt. Juan Marcelo Villegas is maritime governor for Chile's portion of Antarctica and he says the ship has moved about 5 miles (7 kilometers) north, drifting unmanned in zigzags near pointy glaciers.

He says a navy tugboat left port near the southern tip of South America to tow the ship to harbor.

Fog forced Chile's air force to cancel a flight Thursday to check on the ship's condition, but Villegas says the ship is not at risk of sinking.