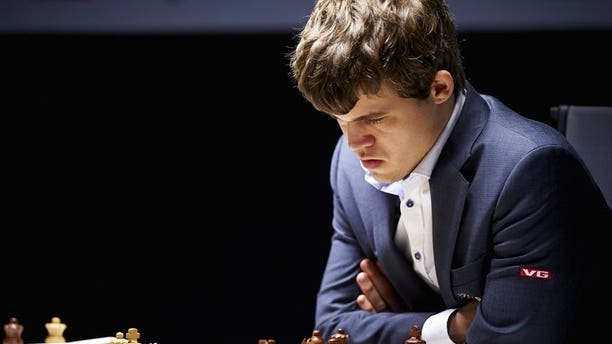 Norwegian chess player Magnus Carlsen, pictured during the last round of the tournament Norway Chess, in Stavanger, on May 18, 2013. Carlsen has inserted an "illness clause" in his contract to play a world championship match in India due to fears of falling sick. (Scanpix/AFP/File)

Norwegian chess sensation Magnus Carlsen has inserted an "illness clause" in his contract to play a world championship match in India due to fears of falling sick, an official said on Monday.

Carlsen, ranked world number one, agreed to play the title match against Chennai-based reigning world champion Viswanathan Anand in his home town from November 7 to 28 only after forcing the organisers to agree to the demand.

"There is a clause by which a player can take a two-day break if he falls ill," All-India Chess Federation secretary V. Hariharan told AFP in the southern Indian venue.

"We told Carlsen that we will provide excellent facilities and make good arrangements, but he must have been worried about the food or weather here and insisted on having this clause in the contract. There was nothing we could do."

Hariharan said it was the first time an illness clause had been included for a world championship match.

Carlsen, who turns 23 on November 30, had earlier slammed the world body FIDE's decision to grant the title match to Anand's home town without a bidding process.

Carlsen, accompanied by his manager and a personal chef, arrived in Chennai on Sunday on his first visit to India to inspect the arrangements being made for the match at a five-star luxury hotel.

Carlsen's manager, Espen Agdestein, had been quoted by the Wall Street Journal on June 3 as saying: "We have to be careful to make sure he doesn't risk getting sick."

Carlsen was due to speak to the press later on Monday after taking on 20 players, aged between seven and 17, in simultaneous exhibition matches in the southern city.

The Norwegian is not expected to meet Anand before he flies out of Chennai later on Monday.