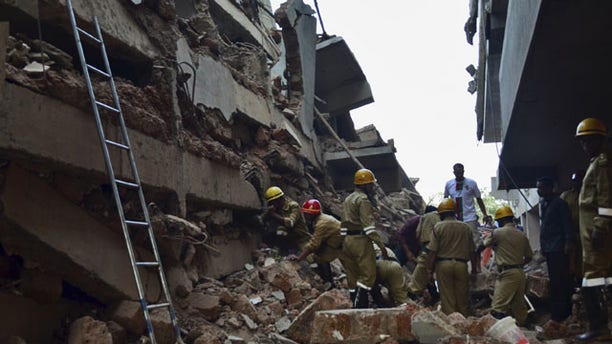 January 4, 2014: Rescue workers stand amid the debris of a building that collapsed in Canacona, a city about 44 miles from the state capital of Panaji, India. (AP Photo)

Rescuers using backhoes and shovels searched for survivors Sunday under a massive pile of broken concrete and dust left when a residential building collapsed under construction in southern India, killing at least 14 workers.

Authorities suspected dozens more may be trapped under the rubble, but were still trying to determine how many workers were on site when the five-story structure crumpled Saturday afternoon in the state of Goa. Witnesses reported seeing at least 40 laborers.

Soldiers and firefighters listened for movement or cries from the wreckage as they worked overnight to clear the debris, state official Venancio Furtado said.

At least 10 people were pulled out alive overnight, but the chance of finding survivors was dwindling, Furtado said. By Sunday morning the death toll had reached 14.

Goa Chief Minister Manohar Parrikar pledged to crack down on those responsible. Police began investigating both the building company and city officials who approved the building's construction on a patch of marshland in Canacona, about 70 kilometers (44 miles) from the state capital of Panaji.

Police said they have so far been unable to track down the construction company managers.

Many of the workers had come from other, poorer states including Jharkhand, Bihar and Uttar Pradesh in search of jobs in India's thriving construction business. One worker who was not at the scene when the building collapsed said he earned about 300 rupees ($4.80) for a day's work, according to Press Trust of India.

Building collapses are common in India, however, as massive demand for housing and lax regulations often encourage builders to cut corners by using substandard materials or add unauthorized extra floors.