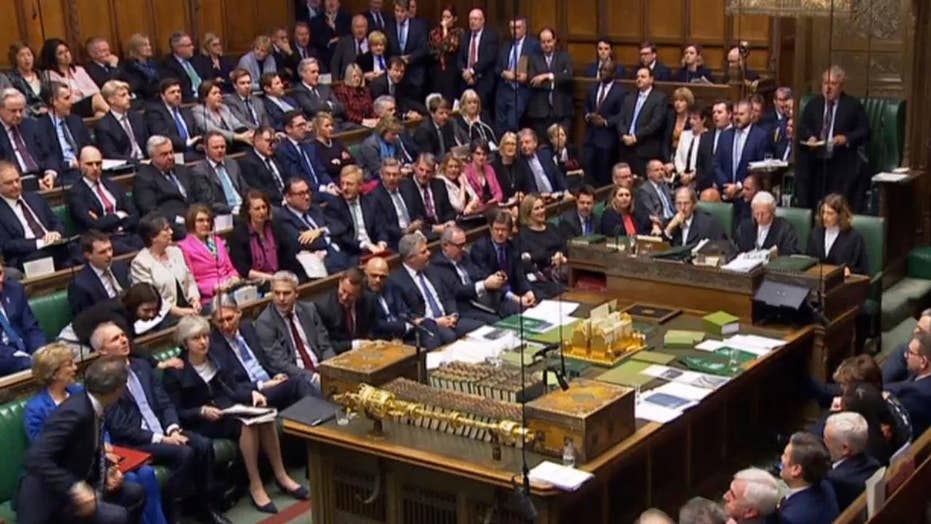 British Prime Minister Theresa May suffered a crushing defeat Tuesday as Parliament overwhelmingly rejected her Brexit deal with the European Union -- a defeat that places the future of Brexit in doubt and intensified calls for May’s ouster via a general election.

May’s withdrawal agreement was voted down 432-202, the largest defeat for a prime minister in the history of the House of Commons. May was expected to lose, but the extent by which she lost was significant and marked a devastating blow for her leadership and her ability to go back to Brussels and negotiate further concessions.

May acknowledged that her deal was rejected by Parliament, but added: "Tonight's vote tells us nothing about what it does support."

Jeremy Corbyn, leader of the opposition Labour Party, immediately tabled a motion of no-confidence in the government, which is likely to be debated on Wednesday. Should that pass, it could eventually lead to a snap general election if another government is not formed within two weeks.

"Her governing principle of delay and denial has reached the end of the line," Corbyn told the Commons after the vote. "She cannot seriously believe that after two years of failure she is capable of negotiating a good deal for the people of this country. The most important issue facing us is that the government has lost the confidence of this House and this country."

UK VOTE ON THERESA MAY'S BREXIT DEAL: WHAT TO KNOW

What happens next is unclear. Britain is scheduled to leave the bloc at the end of March, currently with no deal -- something that many MPs on both sides of Parliament, including May, have said would lead to significant disruption. Some MPs, particularly those who voted to remain in the E.U. in 2016, have called for Britain to delay its departure or hold a second referendum.

May is also likely to face significant pressure from her Conservative Party to step aside, particularly considering the margin of her defeat, which would normally lead to a prime minister’s resignation. But May, having survived a vote of no-confidence from her party in December, is protected from being ousted from her own party until December 2019. It would seem unlikely that many, if any, Tory MPs would back Corbyn's motion of no-confidence, and the Democratic Unionist Party (DUP) -- May's coalition allies -- said that the party would back her in the Wednesday vote.

May has faced criticism from both "Remainers" and "Brexiteers" over her handling of the deal. The anger from the “Brexiteer” wing focuses primarily on the inclusion of a “backstop” -- a safety net that keeps Britain in a customs union with the E.U. in case no trade deal is made after March. It is intended to avoid a hard border between Ireland and Northern Ireland, but Brexiteers have pointed to the lack of a unilateral exit mechanism as evidence that the backstop will lead to Britain never actually leaving.

Former Foreign Secretary Boris Johnson, who resigned over May's negotiations last year, called on May to avoid any "parliamentary plottery and jiggerypokery" and to go to Brussels and demand the backstop be removed.

"Take out, excise, surgically remove the backstop, OK?" he told Sky News. "That's the problem, that's the lobster pot, that's the trap that keeps us locked in the customs union and means we have this terrible Hobson's choice between, as it were, sacrificing Northern Ireland or remaining subject to the E.U. without having any say in the E.U."

"If she has any sense of honor she will resign," he tweeted.

On the Remain side, Liberal Democrat leader Vince Cable said in a statement that the vote marked "the beginning of the end of Brexit."

"With Parliament in deadlock, it is time to go back to the public," he said, a reference to calls for a second referendum.

Ahead of the vote, May and her allies launched a pushback against withering criticism of her handling of negotations, and of the deal. Warning about the dangers to Brexit and to the country of voting down May’s deal, Attorney General Geoffrey Cox asked: “Do we opt for order or do we choose chaos?' 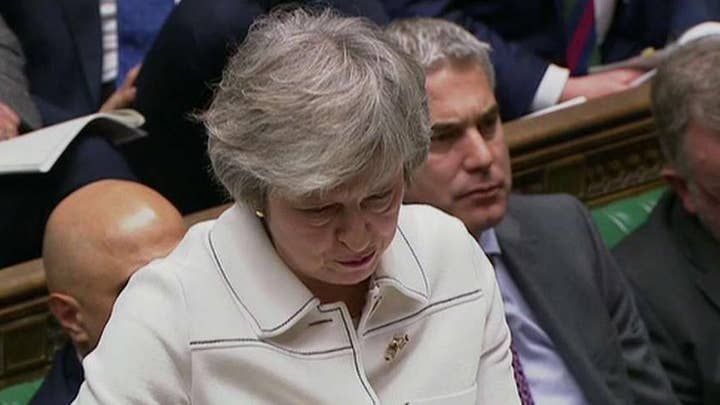 To his own Tory party, particularly the Brexit wing, he turned to the benches and asked: “What are you playing at? What are you doing?”

Environment Secretary Michael Gove, who is a May supporter and also campaigned for Brexit in 2016, sought to rally Brexiteers to May’s side, using a "Game of Thrones" reference to warn that the damage would be significant.

A defeat also not only makes May's future unclear, but also Brexit's. Britain is now set to leave without a deal with the E.U., something that Remainers and some business groups have said would lead to chaos from an economic downturn to a lack of access to vital medicines as Britain’s ports clog up.

Those on the right of the Tory Party have downplayed the risks of no deal, noting that Britain would revert to normal World Trade Organization terms and the benefits of leaving the E.U. would outweigh any difficulties.

“Cutting the costs of imports from outside the E.U., making our economy more competitive, is going to be extremely beneficial,” Jacob Rees Mogg told the BBC. “All the gloomsters, the prophets of doom, are the people who prophesied doom before and they’ve been wrong in all their earlier forecasts.”