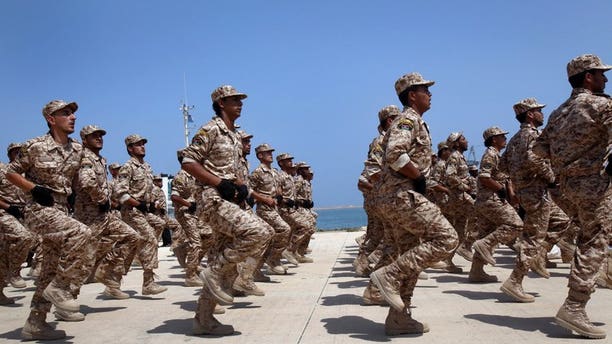 Libyan soldiers march during their graduation ceremony in Tripoli, on July 3, 2012. Britain is to train up to 2,000 Libyan troops in a bid to "help them achieve peace and stability across their country", the British defence ministry announced (AFP/File)

Britain is to train up to 2,000 Libyan troops in a bid to "help them achieve peace and stability across their country", the British defence ministry announced on Tuesday.

"The UK armed forces are to train their Libyan counterparts in basic infantry skills and leadership training with courses beginning later this year," the ministry said in a statement.

Libya's authorities are struggling to form a professional army and police, and regularly use the former rebels who battled against late dictator Moamer Kadhafi to secure the borders or to intervene in tribal conflicts.

The Libyan government will pay for the training at an army site in Cambridgeshire, eastern England, the defence ministry said.

"The training of Libyan armed forces personnel in the UK is part of a broader package of defence and security assistance developed with the US, France and Italy," it added.

"This is aimed at supporting the Libyan government's efforts to increase the effectiveness and capacity of its security and justice sector institutions, and to ensure the state's monopoly on security."

Britain and France led the creation of a NATO no-fly zone in Libya in 2011 at the beginning of the uprising against Kadhafi.