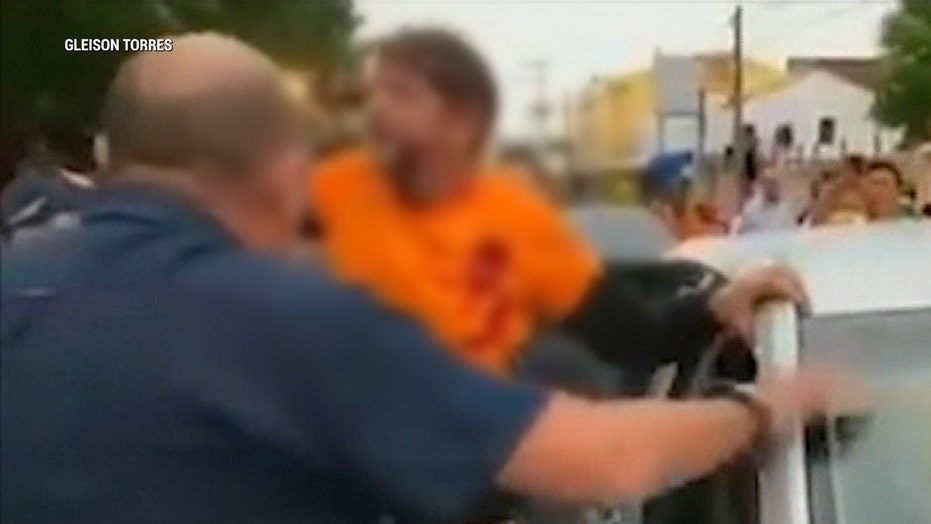 Caught on Video: Brazilian senator shot after intervening in a strike by military police in Sobral

Senator Cid Gomes, a former governor of the state, was hit in the chest and taken to a nearby hospital.

A Brazilian senator was shot Wednesday while trying to intervene in an illegal military police strike in the northeastern state of Ceara, video from the chaotic scene shows.

Cid Gomes, who is also governor of that state, was shot in the chest and taken to an area hospital. The hospital said later in the evening that the senator was in stable condition.

Brazilian Minister of Education Cid Gomes delivers a speech in the chamber of deputies in Brasilia on March 18, 2015. (AFP via Getty Images)

A video showed Gomes driving a backhoe through the gate of a police barrack. It also showed the moment when the vehicle's windows shattered from gunfire.

It wasn't immediately clear where the gunfire originated.

Shortly before heading to the protest, Gomes posted a video on Twitter sharing his anger and calling for people to help him end the strike.

At the protest, Gomes was seen with a bullhorn warning the balaclava-clad officers: "You have five minutes to leave. Not one more."

A man standing with the protesters could be heard telling Gomes he didn’t “have the authority to do this,” before an altercation ensued.

Minutes later, Gomes attempted to ram the backhoe through the barricade and was hit by a bullet.

Military police officers began striking Tuesday over unfair wages. In Brazil, the military police are in charge of patrolling the streets, among other duties, and it is illegal for them to strike.

Hours before Gomes was shot, the Public Security Secretary said in a press conference that authorities would not tolerate the illegal strike. The state secretary said some 260 officers were already under investigation, and that any striking policeman would be banned from receiving its salary and possibly fired.

Justice and Public Minister Sergio Moro said in a statement Wednesday night it would deploy federal forces to help maintain order. The federal police and federal highway police have also been sent to Sobral to ensure the security of Gomes.

The Brazil Forum of Public Security, an independent organization that tracks national crime statistics, condemned the violence. "However legitimate the public security officers' salary demands are, it is unacceptable that bad policemen spread fear and panic among the population," a statement read.