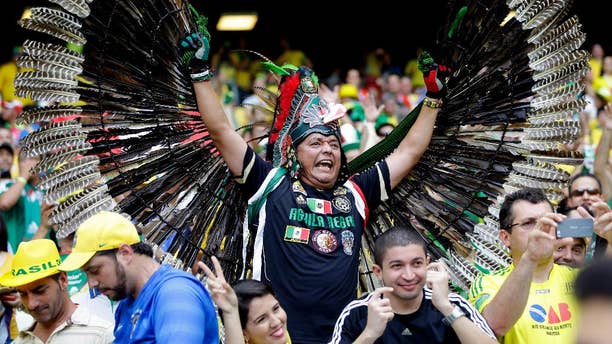 A Mexican fan shows off his costume before the group A World Cup soccer match between Brazil and Mexico at the Arena Castelao in Fortaleza, Brazil, Tuesday, June 17, 2014. (AP Photo/Andre Penner) (The Associated Press)

Brazil's justice ministry says it added security personnel at the World Cup's Castelao stadium in Fortaleza on Tuesday because there were not enough private security guards hired by the international soccer governing body FIFA.

Ministry spokeswoman Barbara Lobato says the "government made the decision to guarantee the safety of fans inside and outside the stadium." She says the ministry does not know the reasons behind the partial absence of guards under contact to FIFA.

State police troops, federal police agents and members of the elite National Force are being used to beef up security at the stadium.

The World Cup Organizing Committee says FIFA and the Brazilian government agreed to increase security due to the "dimension" of Tuesday's game between Brazil and Mexico.