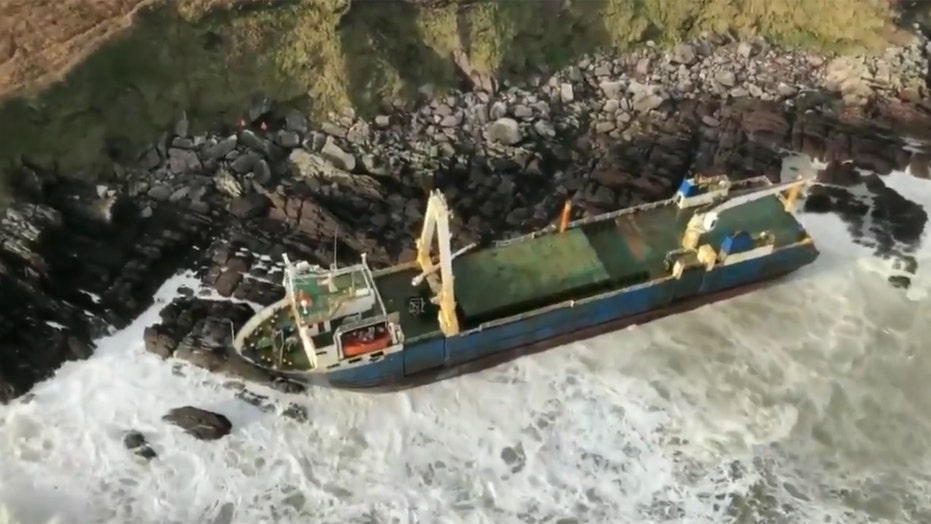 An explosive winter storm that roared across the North Atlantic over the weekend, packing high winds and heavy rain, was fierce enough to wash up a cargo ship that had been drifting at sea since 2018 onto the Irish coast.

The Met Office, Britain's meteorological service, said Storm Dennis brought a month's worth of rain in just 48 hours to parts of South Wales, causing major flooding throughout the region as authorities fanned out to rescue people from homes and businesses.

The storm was dubbed a "bomb cyclone" after rapidly intensifying near Iceland Friday before slamming Britain and Ireland over the weekend. The National Weather Service Ocean Prediction Center said Storm Dennis deepened by 40 millibars in 24 hours, becoming one of the five strongest non-tropical cyclones on record in the North Atlantic.

BOMB CYCLONE STORM RIPS ACROSS UK, SPAWNS MOST FLOOD WARNINGS, ALERTS IN ENGLAND 'THAN ANY OTHER DAY ON RECORD'

The Irish Coast Guard said it responded on Sunday after a cargo ship that had been drifting at sea since its crew was rescued in 2018 ended up on the rocks near Ballycotton, located on the country's south coast.

"There was nobody on board," according to the Irish Coast Guard.

A cargo ship that had been drifting at sea since 2018 washed up on the coast of Ireland on Sunday, according to officials. (Irish Coast Guard)

At the time of the rescue, the crew members had been stranded on the ship for 20 days after transiting from Greece to Haiti when the ship broke down and repairs were unable to be made.

"The vessel has been drifting since," Irish officials said.

Cork’s Evening Echo newspaper reported a county council team was preparing to assess the wreck of the "ghost ship" for possible oil leaks.

"It is located on a dangerous and inaccessible stretch of coastline and is in an unstable condition," the Cork County Council said it a statement to the news outlet.

The storm caused disruptions throughout the region that are expected to last through Sunday.

An ambulance, left, and a vehicle are submerged after flooding in Nantgarw, Wales, Sunday, Feb. 16, 2020. (Ben Birchall/PA via AP)

Major incidents have been declared in a number of areas in England and Wales as authorities mobilized resources to deal with the impact of the overflowing rivers that have cut off some communities. Dennis has been so intense that England posted a record number of flood warnings and alerts. In addition, a rare “red warning," for extremely life-threatening flooding, was announced for South Wales.

A man in his 60s died after falling into the River Tawe in South Wales mid-morning and his body was found further along the river, Dyfed-Powys Police said on social media. Police said his death was not being treated as suspicious or being linked to the bad weather.

On Saturday, Storm Dennis was blamed for the deaths of two men who were pulled from the sea in separate searches off England's southeastern coast.

A member of the public is rescued after flooding in Nantgarw, Wales, Sunday, Feb. 16, 2020. (Ben Birchall/PA via AP)

The British Red Cross said that with water levels expected to peak on Monday or Tuesday it was ready to respond across the country.