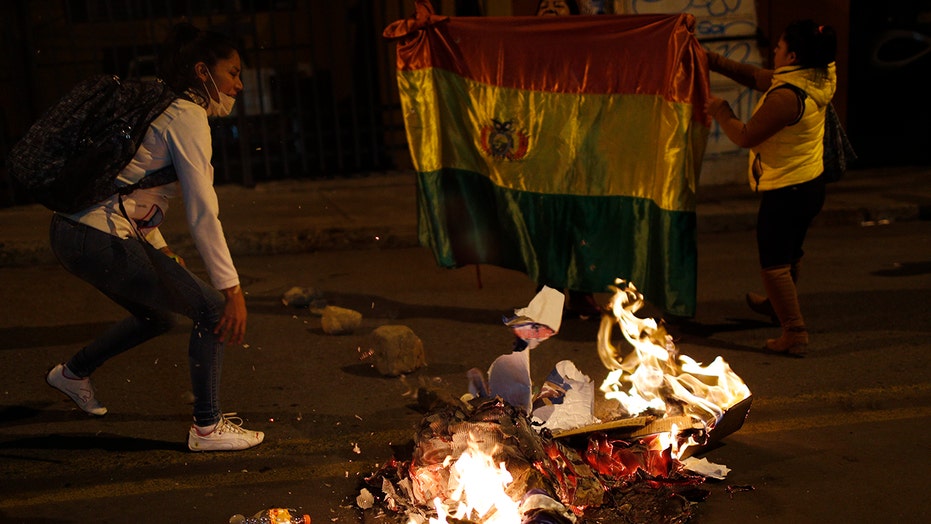 Bolivian President Evo Morales’ claims of a near outright victory in his bid for a fourth term sparked massive and violent riots across the South American nation on Monday night.

In the city of Sucre, opponents of Morales set fire to the regional headquarters of the electoral court while shouting: “Respect my vote!” while in Tarija, disgruntled voters set fire to ballot boxes from Sunday’s election.

In the capital of La Paz, police used tear gas to quell fighting between supporters of the president and the opposition outside of a vote-counting center. Protesters threw firecrackers and stones.

Anger and confusion have reigned since the polls closed and electoral officials abruptly stopped releasing results. At that point, Morales had a lead of 45.3 percent to 38.2 percent over the second-place candidate, former President Carlos Mesa.

Several hours later, Bolivia’s top electoral authorities renewed its preliminary count. The last released results before Monday night showed him falling a few points short of the percentage needed to avoid the first runoff in his nearly 14 years in power,

“The people again imposed their will,” he said.

Supporters of Bolivian President Evo Morales, who is running for a fourth term, rally outside the Supreme Electoral Court where election ballots are being counted in La Paz, Bolivia, Monday, Oct. 21, 2019.  (AP)

However, Morales’ opponents accused officials of trying to help the president avoid a runoff battle in which he could lose to a unified opposition.

Mesa, who had warned earlier that there could be “manipulation of the vote to impede a second round” of voting, called on citizens and civic groups to “conduct a battle in defense of the vote.”

“They can’t take away democracy from us,” he told a gathering of his supporters in Santa Cruz.

“We will work with the intel community to hold accountable anyone who undermines Bolivia’s democratic institutions,” he said in a tweet. “We reject any attempts to initiate violence and call on all parties to resolve the situation through peaceful means.”

Police block protesters from entering the Supreme Electoral Court where election ballots are being counted in La Paz, Bolivia. (AP)

Meanwhile, an observer mission from the Organization of American States expressed concerns about the counting process.

"The OAS Mission expresses its deep concern and surprise at the drastic and hard-to-explain change in the trend of the preliminary results revealed after the closing of the polls," the OAS observer mission said in a statement.

The foreign ministries of Argentina, Brazil, and Colombia also expressed concerns about the situation.

Supporters of opposition presidential candidate Carlos Mesa, a former president, gather outside the Supreme Electoral Court where election ballots are being counted in La Paz. (AP)

Bolivian law says Morales would win an outright victory if he ended up with at least a 10-percentage point advantage over Mesa, avoiding a December second-round election. The official final count is not due for 7 days.

The renewed count showed Morales led with 46.41 percent to Mesa’s 37.06 percent, with 95 percent of the votes counted.

Morales, 59, a native Aymara from Bolivia's highlands, became the country's first indigenous president in 2006 and easily won the two following elections amid more than a decade of an economic boom in South America's poorest country. He paved roads, sent Bolivia's first satellite to space and curbed inflation.

But he has faced growing dissatisfaction, especially over his refusal to accept the results of a 2016 referendum to keep limits on presidential terms. The country's top court, considered by critics as friendly to the president, ruled that limits would violate Morales' political rights as a citizen.

Being forced into a runoff would be a sharp blow to Morales, "whose political success has been impressive and who seemed confident of a first-round win," said Michael Shifter, head of the Inter-American Dialogue, a Washington-based think tank.

Bolivians also elected all 166 congressional seats. Morales' Movement Toward Socialism party lost seats although it retained a majority in Congress.