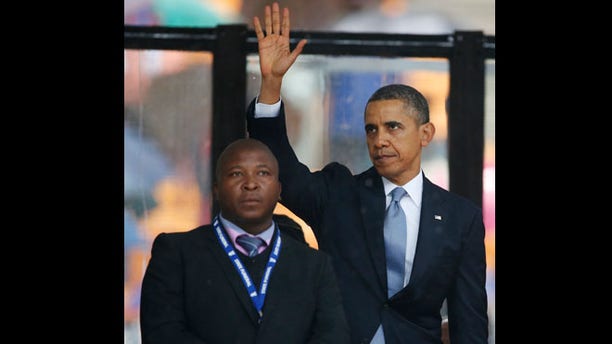 Dec. 10, 2013: President Barack Obama waves standing next to the sign language interpreter after making his speech at the memorial service for former South African president Nelson Mandela at the FNB Stadium in Soweto near Johannesburg. South Africa's deaf federation said on Wednesday that the interpreter on stage for Mandela memorial was a 'fake.' (AP)

The bogus sign language interpreter at last week's Nelson Mandela memorial service was among a group of people who accosted two men found with a stolen television and burned them to death by setting fire to tires placed around their necks, one of the interpreter's cousins and three of his friends told The Associated Press Monday.

But Thamsanqa Jantjie never went to trial for the 2003 killings when other suspects did in 2006 because authorities determined he was not mentally fit to stand trial, said the four. They insisted on speaking anonymously because of the sensitivity of the fake signing fiasco, which has deeply embarrassed South Africa's government and prompted a high-level investigation into how it happened.

Their account of the killings matched a description of the crime and the outcome for Jantjie that he himself described in an interview published on Sunday by the Sunday Times newspaper of Johannesburg.

"It was a community thing, what you call mob justice, and I was also there," Jantjie told the newspaper.

Jantjie was not at his house Monday, and the cousin told AP Jantjie had been picked up by someone in a car Sunday and had not returned. His cellphone rang through to an automatic message saying Jantjie was not reachable.

Instead of standing trial, Jantjie was institutionalized for a period of longer than a year, the four said, and then returned to live in his poor township neighborhood on the outskirts of Soweto. At some point after that, they said, he started getting jobs doing sign language interpretation at events for the governing African National Congress Party.

Jantjie told the AP last week he has schizophrenia and hallucinated, seeing angels while gesturing incoherently just 3 feet away from President Barack Obama and other world leaders during the Tuesday ceremony at a Soweto stadium. Signing experts said his arm and hand movements were mere gibberish.

In the interview last Thursday, Jantjie said he had been violent in the past "a lot" but declined to provide more details and blamed his violence on his schizophrenia, for which he said he was institutionalized for 19 months in a period that included time during 2006. The cousin and the three friends said the "necklacing" killing of the suspected thieves occurred within a few hundred meters (yards) from Jantjie's tidy concrete home near ramshackle dwellings.

The four spoke to the AP on Monday in Jantjie's neighborhood, and one of the friends described himself as Jantjie's best friend.

Necklacing was a method of killing that was fairly common during the struggle against apartheid by blacks on blacks suspected of aiding the white government or belonging to opposing factions. The method was also used in tribal disputes in the 1980s and 1990s. While people who encounter suspect thieves in South Africa have been known to beat or kill them to mete out punishment, necklacing them has been rare.

An investigation is under way by South African officials to determine who hired Jantjie as the onstage interpreter at the Mandela memorial service and if and how he received security clearance. The officials have not said how long their investigation will take place, and reaching them for updates was difficult Monday, a public holiday in South Africa.

Four government departments involved in organizing the historic memorial service have distanced themselves from the hiring of Jantjie, telling the AP they had no contact with him.  A fifth government agency, the Department of Public Works, declined to comment and referred all inquiries about Jantjie to the office of South Africa's top government spokeswoman, who has only said a "comprehensive report" will eventually be released.

Jantjie told the AP he was hired for the event by an interpretation company that has used him on a freelance basis for years. The address that Jantjie provided for the company was occupied by a different company that is not involved in interpreting for the deaf.

The owner of the company was identified by the Sunday Times as Bantubahle Xozwa, who heads a religious and traditional affairs unit of the ANC.

Xozwa told the newspaper that Jantjie was an administrator in his company, South African Interpreters but "is not an interpreter" because he was "was disqualified years ago on the basis of his health."

Two ANC spokesmen and a spokeswoman did not answer their cellphones on Monday, a public holiday, when AP tried to reach them for comment. A number listed for Xozwa in Johannesburg rang unanswered.

The Deaf Federation of South Africa has said it filed a complaint with the ANC about bogus signing by Jantjie at a previous event where South African President Jacob Zuma was present.

"We will follow up the reported correspondence that has supposedly been sent to us in this regard and where necessary act on it," the ANC said in a statement last week.

The AP was unable to verify the existence of the school where Jantjie said he studied signing for a year. An online search for the school, which Jantjie said was called Komani and located in Eastern Cape Province, turned up nothing. Advocates for the deaf said they have never heard of the school and said there are no known sign language institutes in the province.

The Star newspaper of Johannesburg reported Friday that Jantjie said he studied sign language interpretation in Britain at the "University of Tecturers." A British charity that awards qualifications for deaf and deaf-blind communications techniques said it had never heard of the university.